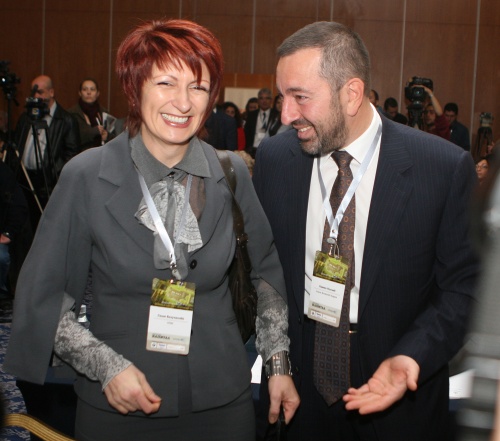 Bezuhanova (L) became the first Bulgarian to receive the prestigious award at a special ceremony in Vienna, Austria. Photo by BGNES

Bezuhanova became the first Bulgarian to receive the prestigious award at a special ceremony in Vienna, Austria.

Bezuhanova is the Director Public Sector of Hewlett Packard Central & Eastern Europe and is responsible for the business of Hewlett-Packard in 27 countries from Central and Eastern Europe.

The Bulgarian nominees for the award were Bezuhanova (in the Business category), Meglena Kuneva (in the Politics category) and Teodora Zaharieva (in the Social responsibility category).

Six of the most powerful European women - from Bulgaria, Hungary, Poland, Ukraine, Croatia and Romania were distinguished by Forum Invest in Vienna.

Other winners included Ioana Filipescu, Managing Director of Raiffeisen Investment Romania, a reputed specialist in the Romanian investment banking sector and Zhanna Savrylova (Ukraine), founder of the “Third Age” University, which helped to turn hundreds of elder people towards an active life.