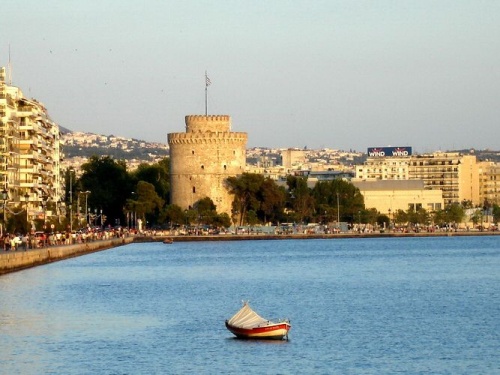 Greece is the greatest destination for Bulgaria's short break fans, who would rather find their pleasures closer to home and whose batteries take longer to recharge.

I was making my way from Sofia to Thessaloniki, in fact cranking my way, on a run-down bus filled with women in their sixties and a group of tourists. The moment we were at the Greek border and the women started calling their relatives back home, telling them everything is ok, I understood these were twenty of those thousands of Bulgarian women, who go to Greece to make their living there as housekeepers and who, according to my rough estimates, bring some 40,000 euros to the Bulgarian economy by sending money every month back home.

I had always thought of these women as of miserable, poor and unhappy elderly ladies, who try to make ends meet by working at the homes of well-off Greeks. I was forced to change my mind the moment we passed the Greek border as their faces immediately lit up. Obviously something better than Bulgaria was awaiting them on the other side of the border. This was certainly true for the tourists. “No, I won't go there, I am sick of it.” These are the responses that I have been recently getting from colleagues, relatives and friends when broaching the subject of going to the Bulgarian seaside. A huge part of the active and working people in the Bulgarian capital have been spending over the last two or three years their summer holidays south of Sofia, in Greece and Halkidiki in particular and 2009 was the year when Halkidiki turned into the summer residence for thousands of citizens. We saw a repeat of the same scenario during the Easter holidays this year, we will see it around the May holidays as well. In fact for more than a decade Greece, Thessaloniki and Halkidiki in particular, has been a much preferred shopping and holiday destination among Bulgarians and expats alike.

No, in fact it is very close if you have the nerves to stand A6 highway, wishfully called Struma Highways. It is not that I love motorways, but they are vastly better and exponentially more convenient than navigating across the countryside. This is where you can pull off when you need a cup of coffee and a sandwich, a spot of lunch or a pee. After surviving the Struma highway you can sigh with relief because the highway from the border checkpoint Promahonas to Thessaloniki is very nice, the distance spreading to no more than 370 kilometers. You have another 100 kilometers to swallow before you get to the branch where you are heading – Kassandra, Sithonia or Athos. So if you have decided to go on a shopping spree, you can easily drop in at the birthplace of Cyril and Methodius.

The prices? Very often a holiday in Greece is even cheaper than in Bulgaria. The prices have not gone up yet under the pressure of the crisis, so this is unlikely to happen soon. Tour operators are not giving signs that the higher fuel and value-added-tax will make them increase prices. The only time when you have to dig deeper into you pocket is when you want to satisfy your vices and buy cigarettes and alcohol. “The northern part of Greece is the most famous destination for the Bulgarian tourists, not least because it is the closest. The Bulgarian is like an internal tourist, like a Greek,” says Leonidas Efthymiou, Director of the Greek National Tourism Organization.

Halkidiki beach line is full of beauty and charm. At every corner, right next to Mt Athos, there is a cozy beach, the photos of which have no need of Photoshop. Greece is proud to have more than 200 beaches, certified with the “blue flag”, an unquestionable proof of high quality. By contrast the number of beaches with this certificate in Bulgaria can be counted on the fingers of your both hands. To top it all off, the Greek summer spans over a much longer period than in Bulgaria and it is no surprise you can hear Bulgarian speech in the thousands of hotels along the beach line from April till the end of August.

Kasandra, the first branch of the Halkidiki semi-island, is the most popular of the three branches on Halkidiki. Besides being the closest to Bulgaria, Kasandra has it all – from four-star hotels to cheap taverns, the typical tourist location with the whole range of the quiet and noisy entertaining attractions attached to it. The second branch Sithonia, according to witnesses, is like heaven – dunes, hills, olive trees, stone houses, miniature fishers' villages. The third one, Mt Athos, is for men's eyes only and even they need a permit first. Veiled in an exotic mysticism, the monks here believe that women and beardless underage men are the greatest temptations that the devil has managed to contrive.

"Greeks can go out for a weekend and the Bulgarians can do the same, unlike the Romanians or the Serbians,” says Leonidas Efthymiou.

That's perfect for me. I like swapping domestic routines for a taste of self-indulgent downtime and I don't take issue with being pampered in a hotel if I don't have to end up spending half as many hours traveling as I do luxuriating. I like to slum it at discreetly understated four-star establishments - not for me the gilt and haut cuisine – I leave that to the Al Fayeds and the Hamiltons of the Balkans. That means Bulgaria and Greece are my destinations of choice. If I am in Bulgaria I often end up at a really run-down hotel, but it is a completely different story if you decide to “slum” it for a short time in Greece.

Bulgaria is very far away from those countries, where people look for destinations so secret, residences so private and clients so up-market and demanding that only a very special kind of person can pull everything together. It all boils down to the well-known brochure. Bulgarians are booking from what they are sent in the post and from talking to a neighbor. If other destinations are the haute-couture of the industry, the resort-based holiday at Northern Greece is the ready-to-wear collection, geared towards middle class tourists.

More than 400,000 people from Bulgaria visited Greece lat year, especially for tourism reasons, regardless of whether they were accommodated in hotels and paid for the nights spent there or stayed at friends, official figures show. This is quite a big number even though it is down by 8,8% over the previous year, which was one of the excellent years in terms of Bulgarian tourists visiting Greece. Bulgarians are not very willing to go to far away destinations and in comparison with the decrease in the number of Bulgarians going abroad in 2009, the figures for Greece are quite good. That was last year. This year, no doubt, Greece is going through its most difficult period. Ironically the sector, which has been hardest hit by the crisis – the tourism sector – is Greece's sole panacea, the only business, which can help it crawl out of this troubled times. Even though it may sound slightly egoistical, as a Bulgarian tourist, I think we can well benefit from the Greek crisis, because this year the holiday in our southern neighbor will be even more financially attractive than last year.

“The Greek tour operators will not increase their prices, so we can safely assume that prices of packages for Greece, offered by Bulgarian tour operators, won't increase either,” says Leonidas Efthymiou.

And that's not all. All the measures that the Greek government implemented in a bid to combat the crisis, particularly the hikes in VAT and fuel, dealt a heavy blow to the country's tourism sector and it will be forced to swallow a very unpopular move – a decrease in prices of the tourist packages offered. Last month the Greek newspaper Vima reported that expectations are for a 15% cut in prices over the last year, both for the low-end and up market.

“As an organization, which is part of the Ministry of Culture and Tourism we believe that the current crisis is temporary. What we are trying to do is keep the good prices and service unchanged, so that our clients are happy,” says Efthymiou.

The decrease in prices though is not a decision for everyone as the smaller, family hotels, which represent the spine of Greece's tourism sector, will see their profits shrink even further. That's the reason why companies opt for keeping the prices, but offering bonuses together with the packages. The question that is on everybody's mind is whether Greece will manage to attract more tourists and what kind of tourists will come – those who pay or those who prefer the all inclusive offers.

With major markets such as the United Kingdom and Germany going down the drain, Greek hoteliers are forced to redefine their priorities and court tourists from new markets – the Balkans, Eastern Europe, Russia, Ukraine, Belarus.

“Our strategy in Bulgaria for this year does not focus so much on the advertisements, as on targeting the professionals in Bulgaria – tour operators, travel agencies, media - to give them the opportunity to know Greece better,“ explains Efthymiou.

He concedes that the period is quite difficult and the amount that Greece allots for advertising this year totals no more than EUR 10 M, which is four time less than the previous year.

Yet if you are a man of contrasts and prefer weekends to be the polar opposite of your Sofia week, Greece is the place to head for. My next destination? Corfu! The islands offer an escape into a world so other, so extravagantly beautiful, so wild that it almost stops the heart when one first gazes upon it.