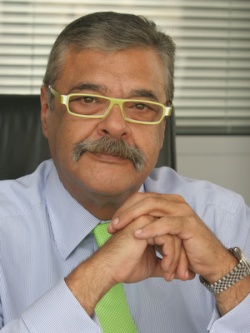 Yoannis Polykandriotis has been the CEO of EKO Bulgaria CEO and a member of the Board of Directors since June 2005.

Before that he occupied managerial positions in big companies such as Delta Dairy S.A., Greece, Shell Greece, Shell Finland, etc.

Mr. Polykandriotis holds a Master’s degree in Economics and Public Finances from the New York State University. He completed his secondary education in a French school in Greece.

In 2009 he became the Chairman of the Hellenic Business Council in Bulgaria.

He has spent two years and a half in the Greek navy. He is married and has one son.

You are the CEO of EKO Bulgaria, part of Hellenic Petroleum. What is the scope of you company’s investments in Bulgaria?

EKO Bulgaria EAD is part of the biggest industrial corporation in Greece – Hellenic Petroleum Group. It is one of the leading energy groups in South-East Europe and operates in more than 10 countries in the region on the whole energy chain.

EKO Bulgaria EAD was established in 2002 and is one of the fastest developing companies in Bulgaria and one of the five biggest fuel retailers on the Bulgarian market. We have a network of 81 fuel stations and 3 oil depots. EKO fuel stations are modern fuel stations, offering high quality fuel and services to their clients with attention to time.

How has EKO Bulgaria been affected by the economic downturn, are you planning to expand?

Like many other big companies, we also face the economic challenges. We have satisfactory results for 2009 as we have expanded our network and we are stable in the moment. We are one of the five big players on the Bulgarian market. Our business intention is to have a 10% market share and 100 fuel stations in the medium term.

EKO Bulgaria is most widely known in Bulgaria for its chain of gas stations. What other projects are you investing in here?

We invest in the development of our network, as this is our core business. The investments in green field construction, acquisition and modernization of already existing fuel stations/networks reach almost the level of BGN 300 M.

We also invest in a positive environment for the drivers. In 2006, we launched our long-term CSR program Call When You Get There! aiming to change driver’s attitude. Every year the program develops further by changing its focus and adding new practical activities with measurable results. More information is available on our website www.eko.bg.

How do you evaluate the regulation and competitiveness of the Bulgarian fuels market? Is it comparable to the market in more developed states such as that of the old EU 15 states? How does it compare with the market in other Balkan countries that you operate in?

The business climate in Bulgaria seems to be better in comparison with other neighboring countries – Serbia, Romania and Turkey.

Bulgarian business environment has passed through a process of development and improvement - regulations, laws and justice work better every day, though there is still a way to go.

The challenges we face here are similar to those faced by every company in every country – big competition on the one hand and the extremely demanding Bulgarian client on the other.

In 2008 we carried out large-scale research that included Greece, Bulgaria, Serbia, Montenegro and Cyprus. It clearly showed that the Bulgarian client is the most demanding.

What is your approach in competing with companies such as OMV, Shell, Lukoil, etc?

We have our own face and our products and services make difference. Since June 2004 we became an exclusive dealer on the Bulgarian market of the new age fuel series EKO KINITRON - UNLEADED 100Speed, UNLEADED 95 Plus and the diesel fuel DIESEL Plus.

We stay close to our customers and offer them not only high quality products, services and friendly atmosphere, but also a positive emotion when they are on the road.

EKO is the company with the biggest number of loyal customers in the sector, shows our last market survey.

EKO is an abbreviation of ElinikaKafsimaOryktelea – Hellenic Fuels and Lubricants.

EKO business activities are guided by respect for human beings and the environment. Our fuels and lubricants at least meet the EU standards and are environmentally friendly because they help lowering the level of the released harmful emissions in the atmosphere.

What is the policy of EKO Bulgaria, respectively Hellenic Petrolium, with respect to biofuels?

Hellenic Petroleum offers biodiesel components in the diesel fuel on the international markets as part of its product portfolio. EKO Bulgaria will offer such products on the local market in full compliance to the new Bulgarian legislation

Hellenic Petroleum is a 25% shareholder of ELPE-Thraki which in turn holds 23.5% of Trans-Balkan Pipeline BV (TBP), the project company. The Greek State owns 1% of TBP.

Is Bulgaria going to benefit as much as Greece – since Bulgaria is just a transit country while Greece plans to build a refinery in Alexandroupolis? Do you think it is possible for the Bulgarian government to renegotiate the contracts so that Bulgaria can also build oil processing facilities on its territory?

Greece and Bulgaria are transit countries with equal participations (24.5% each) standing to benefit in very similar ways from the project: geopolitical benefits from hosting an important energy project which will contribute to global energy security, employment creation (during construction and operation), tax & royalty payments.

There are no plans whatsoever to build a refinery in Alexandroupolis, this is completely false. Also, the oil at Alexandoupolis will be destined for the global oil market and it is unlikely that it will be marketed to Greece

This project has been met with enormous concerns and protests in Bulgaria, especially in the Bourgas region, and particularly with respect to the unloading technology. How big are the environmental risks from the pipeline? How does your company plan to address them? Are there similar concerns in Greece, in the region of Alexandroupolis?

The project will follow the strictest environmental standards in both countries in accordance with national and EU law. TBP is fully committed to working together with the local communities to ensure that their queries are answered and their concerns are addressed.