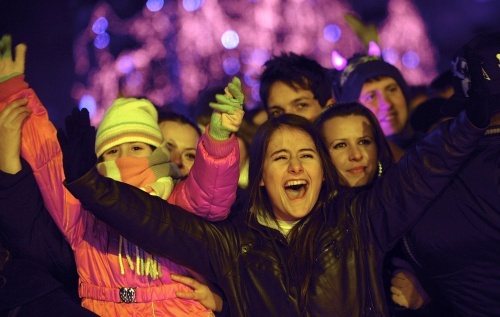 Macedonians celebrate the end of the Schengen visa system for Macedonia, Serbia and Montenegro, in Skopje,The Former Yugoslav Republic of Macedonia on 19 Dec 2009. Photo by EPA/BGNES

From Monday, April 5, a new code comes into effect for short stay visas for the 22 European Union and three non-EU Schengen states in a bid to make getting an EU visa faster and streamline the legal issuing conditions.

A short stay is defined as not more than 90 days in any 180 days period. The Schengen countries provide for passport control-free travel across their internal borders.

“We are introducing, for the first time, clear deadlines for the request and the final answer,“ a European Commission spokesman outlined some of the constraints on issuing countries.

If a visa is refused, the applicant must be told why (the code sets out a standard list of reasons), and he or she has the right to appeal a negative decision.

The standard fee for a short-stay visa of EUR 60 stays the same, but a reduced rate of EUR 35 is to be expanded to cover children up to 12 years old and citizens of countries which have visa facilitation deals with the EU.

More than ten million Schengen visas were issued in 2008. The top issuers were Germany, France and Italy. Among the central and eastern EU members, the Czechs and Poles came first.

Visa policy within the EU continues to evolve, including a common database under developments, and biometric requirement, with particular attention to security and preventing visa fraud.

Bulgaria, Britain, Cyprus, Ireland and Romania are EU members but remain outside the Schengen zone.

Bulgaria submitted its formal declaration of readiness in September 2007 and sent European authorities follow-up reports, penning in March 2011 as the target date for accession to the Schengen zone.

The estimates turned meaningless due to a delay in the award of a tender to produce biometric passports and lack of progress on the second generation of the EU's Schengen Information System, more commonly known as SISII.

At the beginning of February 2010 the European Commission extended the deadline for Bulgaria to sign contracts in preparation for joining the Schengen Area until March 31, 2010.