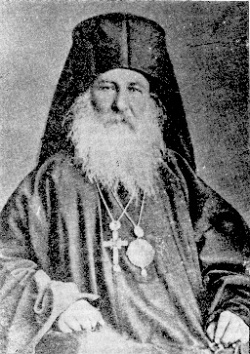 Ilarion Makariopolski, the priest with a key role in the "Bulgarian Easter" of April 3, 1860. Photo by Wikipedia

Bulgarians mark Sunday 150 years since the historic “Bulgarian Easter” which has been seen as a crucial victory in their fight for an independent church.

The so called Bulgarian Easter (“Balgarskiyat Velikden”) was the culmination of the campaign of the Bulgarians in the Ottoman Turkish Empire to set up a national, Bulgarian Orthodox Church that would be independent of the Constantinople Patriarchate.

After it was conquered by the Ottoman Turks in the late 14th century, Bulgaria lost its own patriarchate, and was made part of the diocese of the Greek Orthodox Patriarch of Constantinople. The last partially independent Bulgarian church entity, the Ohrid Archbishopric, was shut down in 1767.

The fight for church independence from the Constantinople Patriarchate was an important part of the Bulgarian National Revival in the 19th century, and was seen as the first step to the creation of a liberated sovereign nation state of the Bulgarians. It sought to curb Greek cultural influence over the Bulgarians in the 18th and 19th century.

Makariopolski and the two bishops who supported him, Avkseniy Veleshki and Paisyi Plovdivski, were jailed by the Patriarchate in a monastery on the Mount Athos Peninsula.

A hundred and fifty years later, the Bulgarian Easter was marked again in the St. Stefan Church in Istanbul with a service performed by an emissary of the Bulgarian Holy Synod, Bishop Sioniy. About 1 000 Bulgarians flocked to the historic church for the Easter service, according to the Bulgarian National Radio.

The service was held at the initiative of Foundation “Bulgarian Orthodox Temple St. Stefan", which has been working for the preservation of the St. Stefan Church, an iron church built in 1849, specially for the Bulgarians in Istanbul.