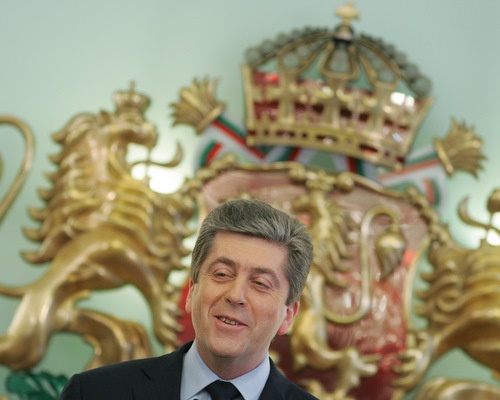 A total of 155 MPs voted in favor of Parvanov’s impeachment while 72 voted against in the first motion in Bulgaria’s history to impeach the acting head of state.

No MPs abstained. A total of 227 MPs out of 240 cast their votes in Wednesday’s debate in Parliament.

The rightists from the GERB party of Prime Minister Boyko Borisov, the Blue Coalition, and the nationalist party Ataka needed 161 votes out of 240 (a two-thirds majority) in order to pass the impeachment motion.

Had they succeeded, the final decision would be in the hands of the Constitutional Court. However, the rightist majority failed to bring the process to this final stage.

All of the MPs of GERB, the Blue Coalition and the Ataka party voted in favor of Parvanov’s impeachment, and the Bulgarian Socialist Party and the ethnic Turkish party DPS opposed the motion.

The outcome of the vote was decided by the position of the 8 MPs from the conservative RZS (Order, Law, Justice) party who used to be in favor of Parvanov’s impeachment. However, early on Wednesday, the RZS party declared it demanded the resignation of Prime Minister Boyko Borisov and skipped the vote even though its MPs had signed the petition to hold an impeachment debate, which collected a total of 162 MP signatures with only 60 needed.

The opposition Bulgarian Socialist Party and the Movement for Rights and Freedoms expectedly attacked the motion, saying that the government turns against everyone who dares criticize its work and shies away from the real concerns of the society.

“Amend the Constitution and write in it that the state is personified by the triumvirate of “Borisov-Tsvetanov-Djankov”, former Socialist Prime Minister Sergey Stanishev said, referring to Prime Minister Borisov, Interior Minister Tsvetanov and Finance Minister Djankov.

According to the ethnic Turkish party, the Movement for Rights and Freedoms, the reasons for the impeachment can be found outside those officially announced by the ruling GERB party.

The center-right ruling party GERB had confirmed in advance their support for the motion, which they initiated. They were backed by their allies from the right-wing Blue Coalition and the nationalist Ataka party, who said the scandal between the institutions, which gave rise to the impeachment motion, was triggered by the president himself, whom they described as an "indecent person".

The rightist majority cited as motives to impeach Parvanov the violation of a total of 15 Constitutional provisions.

The impeachment saga came as a consequence of an argument between President Georgi Parvanov and Finance Minister Simeon Djankov.

The conflict between Djankov and Parvanov flared up after the appearance of the Finance Minister in the talk show of the TV channel Nova Televizia, where he was asked to confirm claims that the president is a “young billionaire” and has “dozens of luxury properties in the United States, Europe and Dubai.” Djankov denied saying such things but quipped that Parvanov, 52, was "definitely not young" which was construed by the Presidential Administration as a hint ruining Parvanov’s image.

The very next day, Parvanov made an official call for Djankov’s resignation.

In an instant reply, the minister denied any wrongdoing, but nevertheless and on the insistence of PM Borisov, who arranged a meeting between him and the President, agreed to try to iron out the “misunderstanding.”

Parvanov later published the transcript, triggering a wave of comments and criticism after which GERB announced they are beginning an impeachment procedure.

Wednesday’s vote was the second time the question of impeaching Parvanov was raised. The first time this happened was in October 2009 as the President refused to recall Bulgaria’s Ambassadors to Turkey and the USA even though the then Foreign Minister Rumiana Jeleva initiated their removal. However, the Parliament never came to vote on an impeachment motion since both Ambassadors resigned eventually and the crisis was resolved.