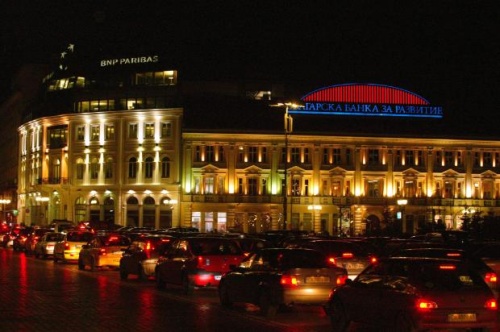 The Bulgarian Development Bank is stepping up with a new bond issue. Photo by politika.bg

The Bulgarian Development Bank is going to issue bonds for about BGN 600 M in order to help the government raise funds to cover part of its debt to private companies.

This new arrangement was announced Wednesday by Bulgarian Prime Minister Boyko Borisov as part of the package of anti-crisis measures approved by the government, the business sector, and the trade unions.

He said the bond issue has been prepared but will be realized within 15 days because of the Easter holidays.

The Bulgarian Development Bank will issue corporate bonds worth between BGN 550 M and BGN 600 M. According to Ivo Prokopiev, head of the Confederation of Employers and Industrialists in Bulgaria, the sum is significant, which meant that the bond issue was designed for foreign buyers.

The newly announced bond issue of the Bulgarian Development Bank is separate from the intentions of the Cabinet to issue new government bonds.

The issuing of new government bonds is the No.1 measure on the list of 59 measures approved by Bulgaria’s Tripartite Council. However, it has not been indicated how much money the government hopes to raise with the new bonds.

The issuing of bonds by the Bulgarian Development Bank is designed solely to raise money which can be paid immediately to private companies for public procurement procedures they have executed.

The Borisov government delayed paying some BGN 1,5 B to businesses at the end of 2009 in order not to generate high budget deficit. The repayment of the state debt has become a hot issue at the beginning of 2010.