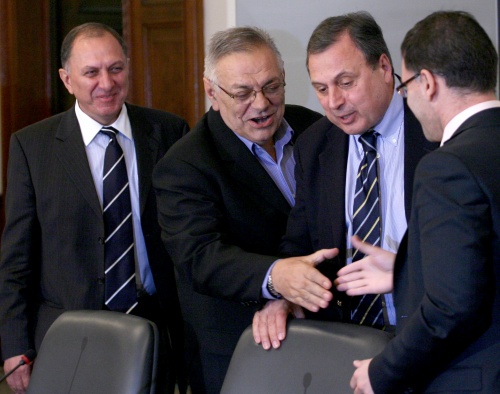 Bulgaria is not going to increase the VAT but will introduce a “luxury tax” in order to generate state revenue, the government, business sector, and trade unions agreed.

The final round of the anti-crisis talks of the Council for Tripartite Cooperation uniting employers, cabinet and syndicates ended Tuesday night.

The Finance Ministry has estimated that its anti-crisis program needs to generate or save a total of BGN 1,5 B whereas the package of measures on which the three social partners shook their hands Tuesday night are expected to have a total effect of BGN 1,63 B.

The anti-crisis program, which the business sector, the trade unions and the government will sign formally Wednesday morning, is focusing mostly on austerity measures and privatization and concession deals shying away from proposed tax increases.

Thus, Bulgaria’s state administration is expected to save BGN 450 M from the 2010 budget by reducing their staff and their additional expenditures, announced Dimitar Manolov, deputy chair of the Podkrepa Labor Confederation.

The privatization of state-owned minority shares through the Sofia Stock Exchange is expected to bring a revenue of at least BGN 200 M.

Bulgaria expects to generate BGN 350 M from the sale of its unused Greenhouse gas quotas under the Kyoto Protocol, said Teodor Dechev, Chair of the Union for Economic Initiative.

Bulgaria’s government is also planning to sell 10% of the 1,3 million decares of state-owned land which is currently not utilized; the other 90% will be given to concessionaires. These two measures are expected to raise BGN 160 M for the state budget.

The Tripartite Cooperation Council has decided in favor of the much debated “luxury tax” focusing on its moral dimensions, i.e. making the wealthy assume a greater portion of the burden of the crisis, rather than expecting much revenue from it.

Thus, the new tax will be levied only on homes worth more than BGN 300 000, and on cars worth BGN 70 000. It will consist of paying double the current dues on such properties and vehicles.

The most contentious anti-crisis measure turned out to be the taxing of the insurance companies. The government originally planned to levy taxes on the income rather than on the profit of the insurers. According to EU directives, Bulgaria is supposed to levy taxes on the premiums of the insurance companies in 2012, and the government and the Insurers Association are starting to discuss the options of introducing the tax earlier.

The businessmen, syndicates, and ministers agreed to make the unemployment benefits 60% of the gross salary that a person received before they were laid off.

A 10% tax on sums won in lottery and gambling games is also expected to raise budget revenue.

After the social partners sign the anti-crisis package on Wednesday, it will also be voted by the Cabinet, which is going to submit it to the Parliament for debates on Thursday.