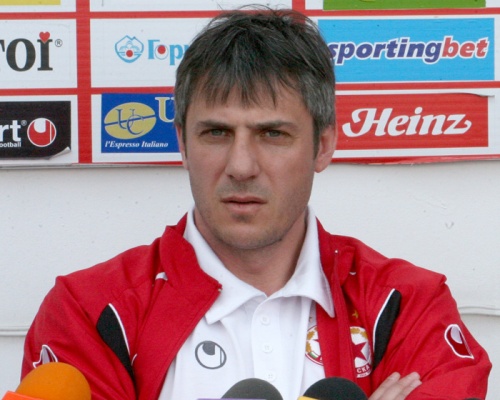 Adalbert Zafirov has been promoted to the position of CSKA club coach, following the resignation of Romanian Ioan Andone. Photo by BGNES

Adalbert Zafirov has been appointed as the CSKA FC team coach, following the resignation of Ioan Andone after less than three months in the job.

CSKA Chief Executive Ventsislav Zhivkov made the announcement at a press conference on Tuesday.

He revealed that Andone had cited "family reasons" for his decision, adding that the Romanian had come to the club with big ambitions that, unfortunately, he would not now fulfil.

Zhikov confirmed the resignation had been amicable and by mutual consent.

Zafirov, who was assistant coach to Andone, will remain in place until the end of the current season, and no other coaching staff will be hired, according to the football club's President, Dimitar Borisov.

Former Bulgaria defender Zafirov, who represented CSKA and PFC Lokomotiv Sofia and won six caps for his country, has now become the third club coach of the season following the earlier departure of Luboslav Penev.

"It's a big chance for me," Zafirov said at the press conference. "Now I'll have the opportunity to prove my abilities."