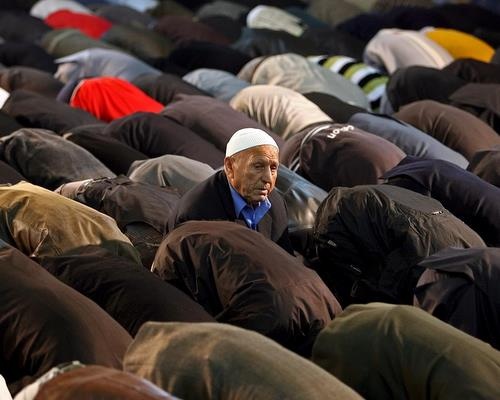 Macedonian Muslims pray at the Sultan Murat II mosque (15th century), as they mark the first day of the Eid al-Fitr festival, ending the Muslim fasting month of Ramadan in Skopje, Macedonia. Photo by EPA/BGNES

Saudi Arabia is pouring hundreds of millions of pounds into Islamist groups in the Balkans, some of which spread hatred of the West and recruit fighters for jihad in Afghanistan.

According to officials in Macedonia, Islamic fundamentalism threatens to destabilise the Balkans. Strict Wahhabi and Salafi factions funded by Saudi organisations are clashing with traditionally moderate local Muslim communities.

Fundamentalists have financed the construction of scores of mosques and community centres as well as handing some followers up to £225 a month. They are expected not only to grow beards but also to persuade their wives to wear the niqab, or face veil, a custom virtually unknown in the liberal Islamic tradition of the Balkans.

Government sources in traditionally secular Macedonia (official title the Former Yugoslav Republic of Macedonia), said they were monitoring up to 50 Al-Qaeda volunteers recruited to fight in Afghanistan.

Classified documents seen by The Sunday Times reveal that Macedonian officials are also investigating a number of Islamic charities, some in Saudi Arabia, which are active throughout the Balkans and are suspected of spreading extremism and laundering money for terrorist organisations.

One of the groups under scrutiny is the International Islamic Relief Organisation from Saudi Arabia, which is on a United Nations blacklist of organisations backing terrorism. It did not respond to inquiries, but has previously denied involvement in terrorist activities, calling such claims “totally unfounded”.

According to its website, it works in 32 countries to provide relief to the victims of natural disasters and to carry out humanitarian, health and educational projects.

“Hundreds of millions have been poured into Macedonia alone in the past decade and most of it comes from Saudi Arabia,” said a government source. “The Saudis’ main export seems to be ideology, not oil.”

Sulejman Rexhepi, leader of the Islamic community in Macedonia, said a number of mosques had been forcibly taken over by radical groups. Four in central Skopje are no longer under the control of the official Islamic authorities. New imams claim they have been “spontaneously” installed by the “people”.

“Their so-called Wahhabi teachings are completely alien to our traditions and to the essence of Islam, which is a tolerant and inclusive religion,” said Rexhepi.

In some mosques believers are being told that Macedonia, which sent 200 soldiers to Iraq and Afghanistan, has been tricked into supporting a crusade against Islam spearheaded by Britain and America. Radical clerics have shown footage from Afghanistan, Iraq and the Palestinian territories to illustrate their claims that the West is waging war on Islam.

Rahman, a 35-year-old cab driver from Skopje, Macedonia’s capital, said he had stopped going to his local mosque since it was taken over by extremists. “Following the Haiti earthquake the new imam said God would punish the West for their wars in Afghanistan and Iraq with natural disasters,” he said.

Bekir Halimi, an imam trained in Syria, runs Bamiresia, an Islamic charity that has been investigated for alleged terrorist links and money laundering. Police raided its offices but failed to find any evidence of terrorist links.

“We are fully entitled to receive funding from both governmental and non-governmental organisations from Saudi Arabia,” said Halimi, who refuses to name the sources of his funding but rejects any suggestion of criminal activity.

Macedonia’s law enforcement agencies warn that the European Union and America have failed to recognise the growing problem of Islamic extremism in the Balkans.

Baroness Ashton, the EU foreign policy chief, has declared stability in the region to be her top priority, but local politicians complain that the EU and Nato are reducing their presence in troublespots such as Bosnia and Kosovo.

In raids elsewhere rifles, bombs and rocket-propelled grenades have been uncovered.

The West has put considerable political and financial efforts into helping build democracy in Bosnia following its civil war in the 1990s. Saudi organisations have also asserted considerable influence, giving more than £450m to build more than 150 mosques and Islamic centres.

In Macedonia, Fatmir, a former disc jockey, explained how he became an adherent of Salafism. The father of two has grown a beard and instructed his wife to wear a niqab. He now makes his living by selling Islamist literature. “Ours is the Islam of the 21st century,” he said.