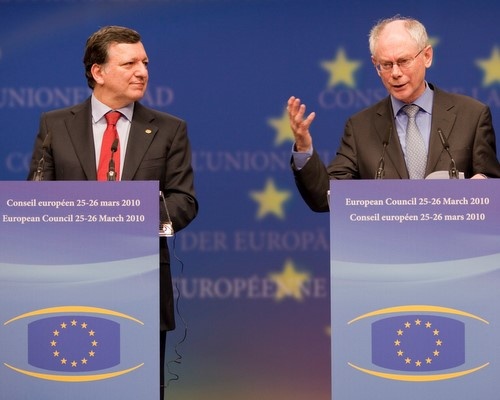 President of the European Council, Belgian Herman Van Rompuy (L) and European Commission President Jose Manuel Barroso gives a news at the end of the first day of the European heads of state Summit in Brussels, Belgium, 25 March 2010. Photo by EPA/BGNES

All 16 eurozone countries have backed a financing plan to help debt-laden Greece, which will include IMF money.

The safety net would total up to EUR 22 B and would apply only if market lending to Greece dried up.

The plan was worked out at a summit in Brussels. Greek PM George Papandreou called it "a very satisfactory" move.

The president of the European Council, Herman Van Rompuy, said the deal was significant "not just for Greece, but for the stability of the eurozone".

"We hope that it [the bailout mechanism] will not have to be activated," Mr Van Rompuy said late on Thursday, after the deal was agreed.

He added that the deal should tell markets to "have confidence that the eurozone will never abandon Greece".

“It’s an extremely clear political message,” European Union President Herman Van Rompuy told reporters after the leaders met in Brussels late yesterday. “It’s a mixed mechanism but with Europe playing the dominant role. It will be triggered as a last resort.”

The deal still needs to be backed by the rest of the 27-member EU.

The Greek crisis was not formally on the agenda of the summit, which is officially concerned with the EU's 10-year economic strategy, and reinvigorating international negotiations over global warming.

But correspondents say that Greece is on everybody's mind.

The news of the agreement comes days after Greek Prime Minister George Papandreou and European Commission President Jose Barroso called on the EU to spell out its rescue plan at the March 25-26 summit in Brussels.

It also follows reports that Greece may seek financial help from the International Monetary Fund over the April 2-4 Easter weekend due to little hope for aid from the European Union.

Euro-zone member Greece is under intense pressure from the EU and financial markets to bring down its budget gap, which hit an estimated 12.7% of gross domestic product last year, four times above EU limits.

The Socialist government has pledged to cut that deficit to 8.7% of GDP this year, and below the EU's 3% limit by 2012.