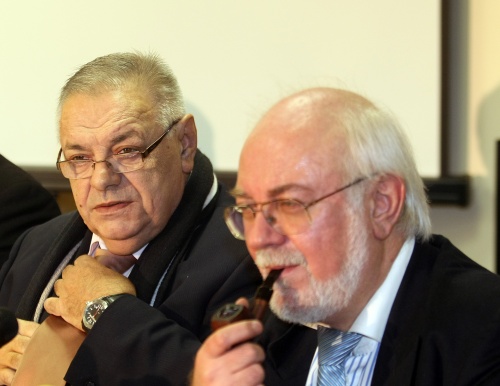 Bulgaria’s two major trade unions have declared themselves explicitly against the government’s intention to raise the value-added tax from 20% to 22%.

Speaking after Wednesday’s meeting of Bulgaria’s National Council for Tripartite Cooperation including representatives of the government, the business, and the syndicates, the leaders of the trade unions mercilessly slammed the Cabinet’s intentions on tax policy.

The chairs of the Podkrepa Labor Confederation, Konstantin Trenchev, and of the Confederation of Independent Bulgarian Syndicates (KNSB), Zhelyazko Hristov, expressed their position on the proposed VAT hike even though this issue was not discussed during Wednesday’s meeting of the Tripartite Council. They are concerned that the increase of the VAT might bring rising inflation leading eventually to stagflation.

Trenchev and Hristov also criticized some of the other anti-crisis policies proposed by the Borisov government.

“We continue to insist on the freezing of the prices of natural gas, electricity, heating, and water. The proposed 15% hike of the natural gas prices will practically murder Bulgaria’s machine building, metallurgy, and fertilizer plants,” Hristov declared in response to Tuesday’s statement of Angel Semerdzhiev, head of Bulgaria’s State Commission for Energy and Water Regulation (DKEVR) that the gas prices will have to go up by 15% starting April 1, 2010, because of the international market developments.

The syndicates insist that the Bulgarian Energy Holding should use its resources to preclude an increase of the price that Bulgarians pay for natural gas.

“We have had a very severe clash with the DKEVR. There are resources and opportunities to cushion the rise of the natural gas prices at least until the end of 2010,” the Podkrepa leader Konstantin Trenchev stated.

He slammed the DKEVR head Semerdzhiev for being inconsistent and for failing to provide arguments for his position that the gas price hike should be approved.

“We have made Semerdzhiev go crazy with our questions. Why does each Bulgarian heating power plant sell electricity at different prices? Why do we pay this much for natural gas now given that a barrel of oil is USD 75? If we have to, we should amend the legislation. Because right now the State Regulation Commission (DKEVR) is like the Holy Synod elected by the Fourth Ecumenical Council – nobody is allowed to overrule their decisions,” declared Trenchev.

The union leaders revealed that a major topic of their Wednesday’s meeting with the government and the business sector was the idea of the cabinet to privatize or offer on concession a number of state assets in order to raise additional revenue.

The syndicates are in favor of increasing the number of concessions to raise money for the state but only with special guarantees that no VAT draining will be allowed.

“Bulgaria needs to issue more government bonds and to sell its free greenhouse gas emissions under the Kyoto Protocol as soon as possible. This is the last hope for a breath of fresh air for the Bulgarian state,” Hristov said.

He vowed that the unions would stand firm till the very end against the government’s ideas to shed certain social benefits or to reduces budget salaries and pensions.

Bulgaria’s National Council for Tripartite Cooperation is meeting again on Friday, when the proposed VAT increase is finally expected to be discussed, as well as during the weekend.

At least 20 of the some 50 anti-crisis measures proposed by the government have been “copy-pasted” from the package on which the six employers’ organizations and the two trade unions shook their hands, said Plamen Dimitrov, Deputy Chair of the KNSB.

He pointed out that the Bulgarian Industrial Association has proposed seven areas of public services which can be administered by the private sector – for example, the registration of cars with the Traffic Police.

The syndicates insist that the firms which receive the money the state owes them for executed public procurement projects should pay immediately any delayed salaries of their employees.