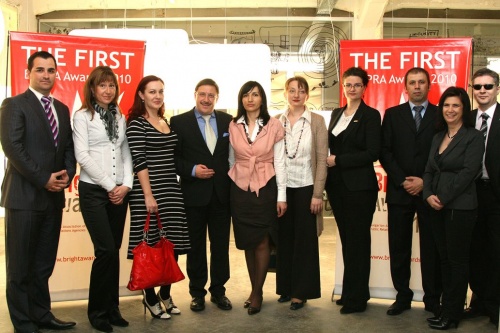 The Bulgarian Association of PR Agencies is bringing seven international experts to Bulgaria to be on the jury of its first Bright Awards, a challenge lauded by the BAPRA Chair, Maxim Behar (fourth L-R). Photo by BAPRA

Seven international experts will form the jury for the “Bright Awards” of the Bulgarian Association of PR Agencies (BAPRA).

At the beginning of March BAPRA announced the start of its new initiative – a prestigious competition with an international jury entitled “Bright Awards” in which Bulgarian PR companies will compete in six categories.

The BAPRA Bright Awards jury will be chaired by the world farmous PR guru with a 20-year experience from the USA, Paul Holmes, founder of The Holmes Report.

The other international experts to be brought to Bulgaria by BAPRA are Richard Houghton from the UK, Chair of the International Communications Consultancy Organization; Bozo Skoko from Croatia, Professor of PR in the Zagreb University and the founder of a leading Croatian PR agency; and chairmen of national PR associations - Pawe? Trochimiuk, President of the Polish PR Consultancies Association; Salvador da Cunha, Chairman of the Portuguese Association of Communications and Public Relations; Peter Szeles, head of the Hungarian Public Relations Association; and Teodor Frolu, head of the Romanian Public Relations Association.

“This should have happened a long time ago, and I am happy that it is exactly us, the major representatives of the PR business in Bulgaria, who made it happen. It has been a challenge to bring seven representatives of PR associations from around the world to the first edition of the BAPRA Bright Awards but it was worth it. This is a great chance for the Bulgarian PR market to receive the most objective and adequate evaluation,” commented Maxim Behar, the head of BAPRA.

The BAPRA Bright Awards will be handed in six categories: “Sustainable Development Campaign”, “Special Event”, “Innovative Campaign”, “Campaign Realized by an Internal Department”, “Communications Campaign of the Year”, and “PR Agency of the Year”.

The main criteria for awarding the prizes are explicitly based on innovation and achieviment of the goals set by the clients.

Bulgarian PR companies will be able to submit their nominations between March 16 and April 4 on the website of BAPRA Bright Awards website, www.brightawards.eu, which also provides full information about the conditions of the competition.

The Bright Awards finalists will be announced at a gala dinner with the participation of the international jury at the end of April 2010.