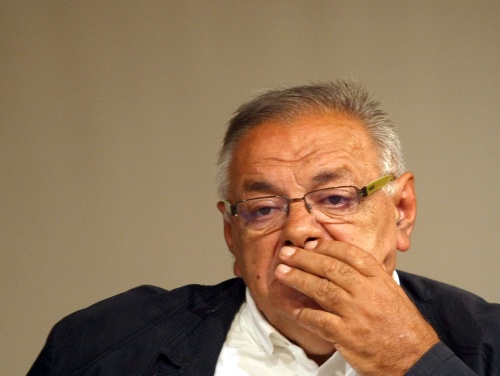 The President of the Bulgarian KNSB Labor Union, Zhelyazko Hristov, says the proposals to issue government bonds and securities and to trade emissions under the Kyoto Protocol have been approved as anti-crisis measures. Photo by BGNES.

Bulgaria's cabinet, labor unions and employers have reached partial agreement on the anti-crisis package, representatives of the National Council for Three-Way Partnership reported.

The accord has been reached about measures to support the treasury, straighten the State's fiscal discipline and limiting expenditures. The more debated measures, however, such as increasing the Value Added Tax (VAT) and freezing prices of electricity, water, heating and natural gas have been postponed for Wednesday.

The Vice President of the KNSB Labor Union, Plamen Dimitrov, reported that an agreement has been inked regarding the idea to privatize minority State shares in companies through the Bulgarian Stock Exchange. The KNSB President, Zhelyazko Hristov, stated that the proposals to issue government bonds and securities and to trade emissions under the Kyoto Protocol have also been approved.

Business representatives voiced their deep satisfaction from the dialogue, which they say, was extremely constructive, adding for the first time in many years there are conditions to reach consensus among the partners in the National Council, but the fact the measures are already delayed is alarming.

The increase of VAT to 22% was not put on the table Tuesday, nevertheless the labor unions and the employers stated their position. The labor unions are firmly against the move over the blow that will be endured by business and consumers alike, but the employers said the VAT increase could be a better solution than the elimination of the flat tax, which makes Bulgaria an attractive destination for foreign investments.

The new idea launched by the social partners Tuesday is to ask political parties to refund 15% of their State subsidy.