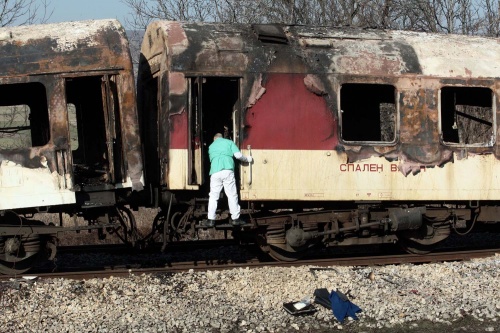 The charred sleeping car where 9 people died after the February 2008 blaze in the train traveling from the northern town of Kardam to the capital city of Sofia. Photo by BGNES

The District Court in Bulgaria's northern city of Pleven postponed for April 22 the case of the deadly fire in the Kardam-Sofia train over the need to question 2 more witnesses.

The defense council requested to call on the witness stand the head of the Passenger Travels Directorate at the Bulgarian State Railroad Company BDZ and one of the members of the train crew. The latter were never before considered as potential witnesses.

All other witnesses have been interrogated, the last ones Monday, and all evidence has been collected.

The defendants are pleading not guilty in the death of 9 passengers, who perished on February 28, 2008 after their sleeping car caught fire. The defendants will be heart by the magistrates only after all witnesses appear before the Court.

The ticket collector of the ill-fated car, Georgi Georgiev, along with Georgi Ivanov, Deputy Head of the BDZ Passengers' Travels Directorate, and the Chief of the train, I. Kostadinova are the defendants in the trial. Georgiev and Kostadinova face up to 15 years behind bars for negligence which caused 9 deaths, while Ivanov faces up to 5 years for ordering the locking of the cars' doors.

The Prosecutor will request the maximum penalties.

The magistrates honored on Monday the civil claim of the fathers of one of the victims, who requested BGN 200 000 in punitive damages – twice higher than the initial one.