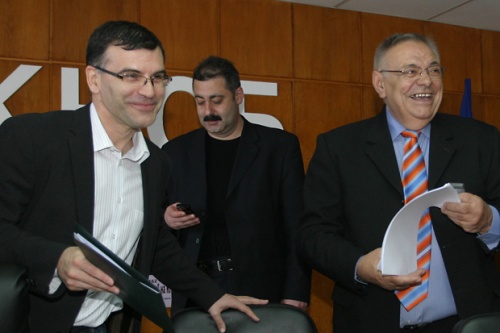 Djankov (L) stated that the center-right GERB government gives its full support to the measures related to the stability of the fiscal framework. Photo by Sofia Photo Agency

The Bulgarian government has approved 80% of the anti-crisis measures put forward by unions and employers on Sunday, Finance Minister Simeon Djankov reported.

Djankov, speaking after meeting with representatives from employers and unions from around Bulgaria, said that he had been provided with interesting and innovative ideas related to fiscal stability and the active work of the Bulgarian Development Bank. He added that these ideas would now be developed with the help of his team and social partners.

Djankov stated that the center-right GERB government gives its full support to the measures related to the stability of the fiscal framework. These include privatization of state minority shares through the stock market and restoring financial discipline in the state by speeding up reimbursement of VAT and excise duties within the legal deadline.

Djankov did not explain what was in the 20% of the plan that was not approved, but announced that discussions will continue on Tuesday to attempt to reach a final draft of the anti-crisis measures.