Skin Heads Arrested after Skirmish with Gay Rally in Bulgaria 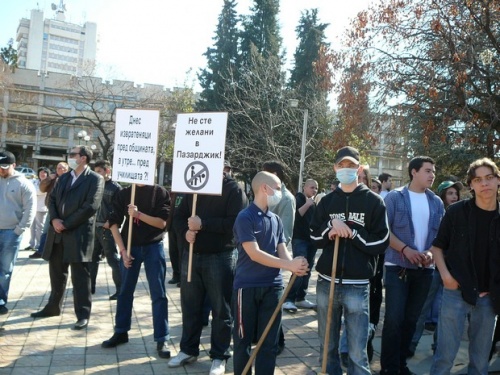 Six skin heads supporters were arrested in Pazardzhik as they tried to assault a gay rights rally of only 6 activitists who arrived from Sofia; pictured: the anti-rally attracted 100 locals. Photo by Darik Plovdiv

Six men were arrested in Bulgaria’s Pazardzhik after they assaulted physically a rally supporting gay rights.

Six activists of the youth organization “Lesbians, Gay, Bi- and Transgender in Action” arrived to the city of Pazardzhik from Sofia in order to protest an order to local City Council banning the display of homosexuality in public.

The activities arranged large banners on which they started writing articles from the Bulgarian Constitution and the UN Human Rights Charter. No local gay rights activists joined them, Darik Radio reported.

However, about 100 local young men most of them with shaved heads and in black clothes staged an anti-rally claiming they had gathered to express their support for the order issued by the City Council.

As several of skin heads members attacked the gay rights activists they were immediately knocked down to the ground and arrested by the policemen guarding the rally, who were led personally by the head of the Pazardzhik Police Directorate, Commissar Stoyan Stoyanov.

No-one was hurt during the skirmish. However, the anti-rally protestors shouted offensive slogans directed against the gay rights activists such as “No one wants you, losers”, “Out of Pazardzhik”, “Go to Uganda, freaks”.

The gay rights organization has attacked the order of the Pazardzhik Municipality before Bulgaria’s Commission for Protection from Discrimination, which is to come up with a ruling on Wednesday.