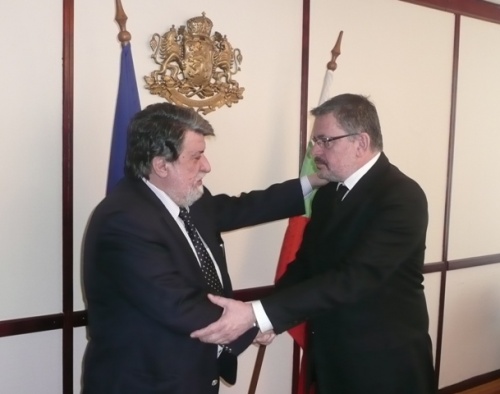 Culture Ministers of Bulgaria and Montenegro, Rashidov and Micunovic, back the idea for a joint Balkan effort to help quake-stricken Haiti. Photo by BGNES

Several Southeast European nations are going to contribute to the establishing of a “Balkan Hospital” in Haiti, Bulgaria’s Culture Minister Rashidov announced.

The money for the hospital are expected to come up from several regional initiatives but, most of all, from a concert of Balkan performers to take place in Sofia in May 2010, which is the idea of Vezhdi Rashidov himself.

Micunovic has expressed support for the idea of a Balkan hospital which will help relief efforts in Haiti, the poorest Latin American nation which was struck by a horrific earthquake in January. He has promised to refer the idea to his Albanian colleague; Bulgaria’s Minister Rashidov is going to present the initiative to his Turkish counterpart.

“The other Balkan countries have already given their support. With the money that we are going to collect, we will set up a Balkan hospital in Haiti. The Sovereign Order of Malta, which is a patron of our initiative, is going to help us by providing medical equipment,” Rashidov announced after his meeting with the Montenegrin Culture Minister.

The two Ministers have signed an agreement for bilateral cultural cooperation covering the period between 2010 and the end of 2012.

The wide-ranging three-year program relates to visual arts, theatre, music, publishing, and protection of cultural assets. It will also include the prevention of illegal exports and transfer of works of art.

The program will operate through several cultural institutions in both countries, under the supervision of the Ministries themselves.