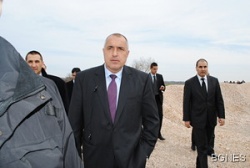 Borisov (C) said “we have already approached the prosecutor’s office regarding ‘Tsankov Kamak’, but I bought along the Interior Minister Tsvetan Tsvetanov (R) to make the necessary investigations.” Photo by BGNES

Bulgaria PM Boyko Borisov has revealed that prosecutors are already studying the project of the hydroelectric power plant – ‘Tsankov Kamak’.

Borisov, speaking at the site of the project, said “we have already approached the prosecutor’s office regarding ‘Tsankov Kamak’, but I bought along the Interior Minister Tsvetan Tsvetanov to make the necessary investigations.”

Borisov did not say what the fate of the project will be; “It is like Belene NPP, if we stop - we lose the same amount again and if we go on we create an even greater deficit. It is here that the money for for mothers with children, the military and police has been spent.”

The initial price of the ‘Tsankov Kamak’ project is reported to have risen by EUR 250 M. Borisov continued that only this year the inflationary index of the contract was EUR 90 M, with EUR 59 M already paid by the National Electricity Company (NEC).

According to Energy Minister, Traicho Traikov, thhe contract for the building of the Plant was done on the basis of “Come here Wolf, eat me”.

The Executive Director of NEC, Krasimir Parvanov, said that his company can not spend money on the project in these times of financial crisis and said one of the options is to seek a loan.