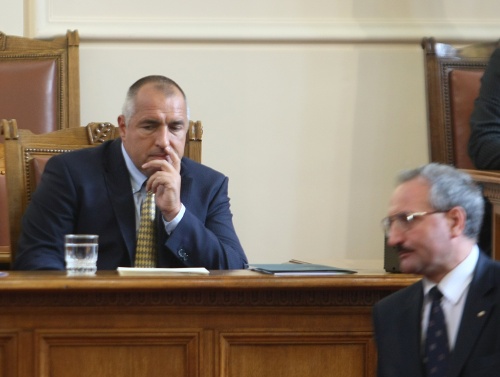 “Environmentalists need not worry, I'm completely satisfied, because the law was made more rigorous, strengthening and protecting our traditional production and biodiversity,” Toshev (R) concluded after the Parliament vote. Photo by BGNES

The Bulgarian Parliament has passed amendments to the GMO Act which mean that GM crops will not be allowed to be grown in the country.

After a number of days of debate Bulgaria’s MPs finally passed the strongest possible amendments which although they do not include a total ban on GM crops, make it impossible for farmers to grow them commercially or in trials. Bulgaria has thus become the first country in Europe to introduce such stringent laws for all forms of GM crops.

The governing GERB party earlier removed the proposed 5 year GM crops moratorium proposal as they found that it was not necessary, considering the amendments proposed by rightist Blue Coalition MP Lachezar Toshev mean that farmers will never be given permission to plant them.

The long-debated articles 79 and 80 of the amended GMO Act were finally voted on and passed on Thursday: They ban the planting of GM crops within the boundaries of protected areas in the Protected Areas Act and within the protected areas of national ecological zone under the Biodiversity Law.

GM crops will not be allowed to be grown within 30 km of the protected areas, within 10km of bee hives or within 7 km of organic farmland – leading to an overall ban countrywide in practise.

“Environmentalists need not worry, I'm completely satisfied, because the law was made more rigorous, strengthening and protecting our traditional production and biodiversity,” Toshev concluded after the Parliament vote.

Bulgaria has seen a month of protests by environmentalists since the first reading of the ammended GMO Act in Parliament, which led to the government making a last minute decision to support the full and complete strengthening of the law.