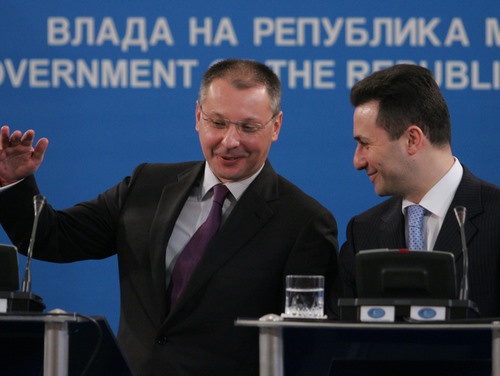 Bulgaria's ex PM Stanishev handed the "Friendship Treaty" to his Macedonian counterpart Gruevski in Dec 2008, according to Macedonian press. Photo by BGNES

Macedonian papers have expressed their outrage over bits and pieces that allegedly leaked from the ‘Friendship Treaty’ proposed by Bulgaria.

Six of the 21 items in the treaty – which the Bulgarian government recently announced it had proposed to Skopje in order to provide for good neighborly relations – are problematic, according to an article of the Dnevnik Daily.

”Bulgaria is placing itself in the position of the elder brother,’ the paper says citing unnamed sources which have seen the English-language version of the proposed treaty. The document is said to be stressing the importance of the 1999 joint declaration for development of the bilateral relations and the legal framework in the field of culture.

”The proposed document contains too many disputable items which makes it hard to talk about construction good neighborly relations. On top of that, it reinforces the thesis for a single nation living in two separate states,” said an anonymous expert cited by the Dnevnik Daily.

The article expresses concern over the fact that Bulgaria has approached Macedonia from ”a position of power” by stressing that it is a member of the EU and NATO, while Macedonia is aspiring to join these organizations.

Item 10 of the proposed treaty says that ”the two parties should deepen their cooperation in the field of culture, their common culture, and cultural heritage... based on bilateral programs.”

Item 12 is reported to be providing for ”the protection of the joint cultural and historical heritage and organizing joint celebrations of historical events shared by the two countries.”

Item 13 focused on having Macedonia support the actions of the Bulgarian state and NGOs for the preservation of Bulgarian military monuments and cemeteries on its territory.

The Macedonian newspaper says Bulgaria assumes no reciprocal responsibilities according to the treaty.

Item 17 stipulates that Macedonia should strictly confirm its commitment that there is nothing in its Constitution that can be used as a basis to intervene in Bulgaria’s internal affairs.