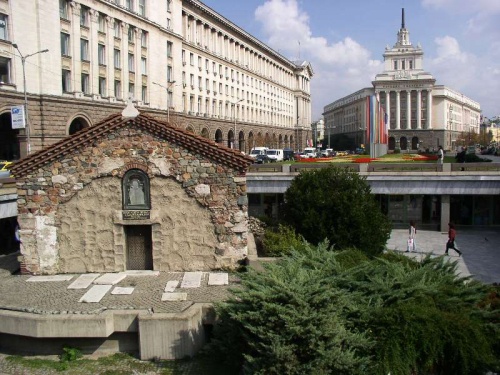 A new medieval church has been uncovered in downtown Sofia. Pictured: the St. Petka Church. Photo by wordpress.com

The construction of the second metro line in the Bulgarian capital Sofia has been stopped over the discovery of a unique archaeology site.

On Monday the builders came across a medieval church located in the very downtown of Sofia, next to the Tzum retail center. This led to a temporary termination of the construction work.

Archaeologist Snezhana Goryanova from the National Archaeology Institute showed the two top officials around the spot showing them the remains of the church with preserved murals dating back to the 12th century, and remains of early medieval buildings dating to the 5th-6th century. Several medieval graves have been discovered near the church.

Minister Rashidov has made it clear that a special commission of experts is going to inspect the site of the frozen construction, and will come up with measures on how to continue building the metro and to preserve the findings.

The Culture Minister has declared that he is impressed with the new discoveries and that the authorities have to do whatever is needed in order to preserve them.

Archaeologist Goryanova has stated that a temporary shelter must be constructed in order to preserve the finds. According to archaeologist Mario Ivanov, there are two ways to achieve this – by taking them out of the spot and setting them in a museum, or by keeping them on their original spot, and having the metro line go much deeper, below them.

The Chief Architect of Sofia, Petar Dikov, has promised to comply fully with the recommendations of the experts of the Ministry of Culture and the Archaeological Institute. He said the construction of the second metro line is going to continue only after a decision has been made on what to do with the finds.

Downtown Sofia is filled with archaeological sites from the Antiquity and the Middle Ages; Sofia Architect Petar Dikov has revealed a plan to restore the Roman streets and structures of Sofia, known in Roman times as Serdika, in order to create an open-air tourist attraction.