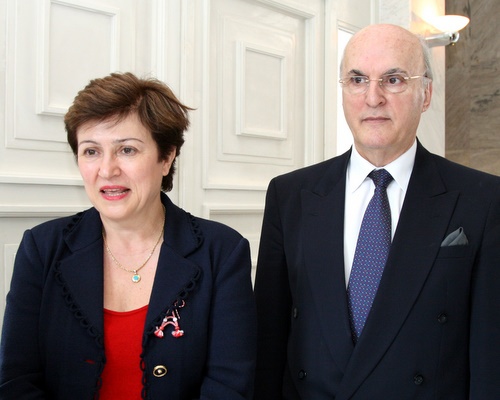 Bulgaria’s EU Commissioner, Kristalina Georgieva, who is in charge of the EC humanitarian aid portfolio, has answered questions of Novinite.com (Sofia News Agency) and a couple of Bulgarian-language media before she joined the Ambassadors of the EU member states in Sofia for a special lunch organized by the Spanish Embassy in Sofia as part of the program of the Spanish EU Presidency.*

How are you going to comment on the warning issued Sunday by leading Bulgarian economists, that the country is threatened by a huge budget deficit, and it is possible to get into Greece’s situation?

For the time being I don’t think there is any such danger for Bulgaria because the Bulgarian government is disciplined in its work, and it is not only very careful with the spending part of the budget but it is also trying to find ways to boost the income part of the budget including with its successful work on unblocking Bulgaria’s frozen EU funds. We have to work further on that.

If we look at Bulgaria’s situation, we have low foreign debt which means that our economy can take a breath of fresh air, we have some space to borrow. We have a stable macroeconomic framework and the perspective for our economy is better because we are now entering in the period of absorbing EU funds.

However, as I am saying all that – we should always try to be careful because the crisis is not over yet, we are trying to adjust to the new circumstances.

The Bulgarian government is doing that. Over the last two days I had meetings with the economic team of the government and with the Prime Minister, and I see that they are focused on evaluating the circumstances and reacting to them.

How do the EU officials in Brussels view the developments among the Bulgarian institutions, including the motion for the impeachment of President Georgi Parvanov?

The big, important topics for Europe as far as Bulgaria is concerned are the judicial system, perhaps the implementation of the legislation, and if the country’s macroeconomic stability is preserved.

These are the big questions that are important for Brussels because they determine how stable Bulgaria is as a EU member state, they also determine our perspectives.

The impeachment motion is an internal issue, it is the job of the Bulgarian politicians to work it out.

What is your personal reaction to it?

It is not the job of a EU Commissioner to comment on this issue. It should be resolved in Bulgaria.

Do you think that the new EU Strategy 2020 is going to work out in the conditions of economic crisis, and that it will not have the fate of the Lisbon Strategy?

The thing which is good about this strategy is that it is specific and has clear indicators and a level of ambitions which is realistic under the present circumstances.

Each EU member state has to look at this strategy and figure out what these indicators mean for it, and how each of them can use them to the benefit of their own state.

If you look at Bulgaria’s position, I think that the indicators of the EU 2020 Strategy provide a very good framework for Bulgaria, on which it can base its policies in order to protect its best interests. But when we are talking about Europe 2020 we should not forget Europe 2010.

The USA and the EU are rather different in terms of philosophies of working and of doing things. What is the thing that you have brought with your from Washington, DC, to Brussels, i.e. from your work as a World Bank Vice-President, to your work as a EU Commissioner?

It is focus on goal and work organized on a team basis, horizontally, in cooperation with the other offices, the other EU Commissioners. So it is being goal-oriented and cooperating with the others.

I would like to say something in the presence of His Excellency, the Ambassador of Spain, Mr. Jorge Fuentes. I would like to point out that I am extremely grateful to the Spanish Presidency of the EU for their work for the Union and for their support for my portfolio, humanitarian aid, and for providing me with very specific cooperation – for my recent trip to Chile where I went together with the Spanish crown prince Felipe.

*This interview includes questions by Novinite.com and other Bulgarian media.