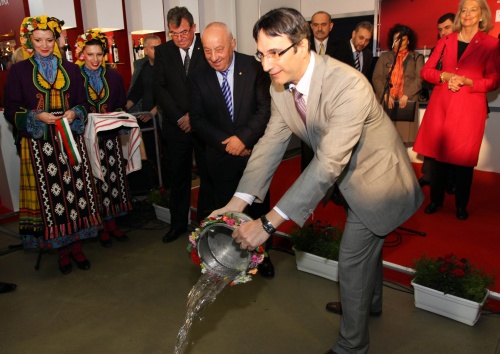 In his opening statement, Traikov declared that the wine production sector in Bulgaria is developing as a combination of old traditions and new technologies.

A total of 262 wine producers (114 Bulgarian) from 14 different states participate in Vinaria 2010. For the first time the Republic of South Africa is a partner of the forum.

The Vinaria 2010 expo will last until March 17. For the first time Bulgarian producers presented "bio wine" made of organic grapes with a special environment friendly technology. The producers expect that the bio wines will be well-received abroad and will boost Bulgaria's wine export which dropped by 40% as a result of the economic crisis.

Meanwhile, over 100 Bulgarian wine producers supported by the regional wine chambers in Plovdiv and Varna handed Minister Traikov a declaration protesting against the obligatory introduction of measuring devices in all wine production establishments. This requirement was issued by the government in February.

Traikov has defended the measure which is aimed at reducing the evasion of excise taxes. He said he was aware of the concerns of the producers but that the measure will be introduced for a trial period and could be revised if it was detrimental or inefficient.

The producers complain about the cost of acquiring the respective measuring devices claiming that some of them might go bankrupt as a result of having to purchase the equipment in question.