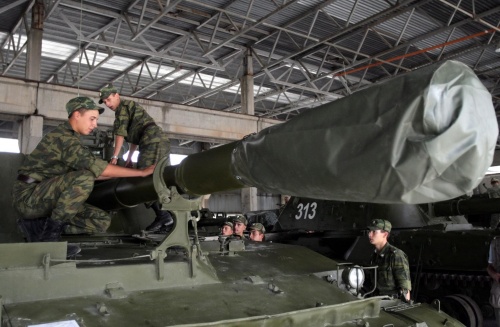 Soldiers work on a tank in a Russian military base in Tskhinvali, the capital of South Ossetia, Georgia, 07 August 2009. Photo by EPA/BGNES

Georgia was thrown in panic overnight as fake report of a Russian attack was shown on the Imedi TV.

Imedi TV presented the report as an “immitation of possible events” but many viewers who missed the beginning failed to realize that it was fake.

The TV report said that Russian tanks entered the Georgian capital Tbilisi, and that President Mikhail Saakashvili had been killed, ITAR-TASS reported.

The Georgian Interior Ministry has pointed out that the report – which did not show any message that it was fake after the one at the beginning – created excessive panic in the Georgian population.

The proclaimed aim of the report was to remind the Georgians of the five-day war with Russia from August 2008 over South Ossetia when Russian forces were 45 km of the capital Tbilisi. The report of the Imedi TV featured archive footage from the five-day war showing advancing Russian tanks.

The Imedi TV report fooled the Russian media as well, as Interfax announced of unconfirmed information that Russian tanks invaded Georgia and Saakishvili had been killed, and the Echo Moskvy Radio stopped its regular program in order to announce the fake news.

An anchor of Imedi TV has apologized for the panic the report might have created, saying, “We just wanted to show what the most terrible day in Georgia’s history could be like.”

International media have remarked that the fake Russian invasion report is directed against opposition opponents of Georgian President Saakashvili who have called for restoring the diplomatic relations with Russia.