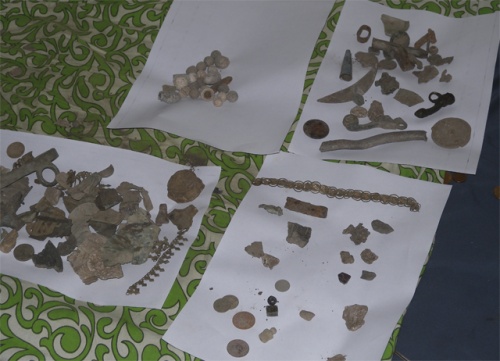 Bulgarian authorities intercepted at the airport in Sofia two packages addressed to Dutch citizens containing a large number of valuable objects dating from the Antiquity and the Middle Ages. Photo by BGNES

Employees of Bulgaria’s Unit for Combating Organized Crime (GDBOP) intercepted a channel for the illegal export of objects with cultural and historical value to the Netherlands.

The joint operation between the GDPOB’s Directorate dealing with the illegal traffic of antiques, the police in the Black Sea city of Burgas and the Customs Agency at the Sofia Airport was carried out on March 10 and 11.

The police intercepted at the airport two packages addressed to Dutch citizens. The content analysis revealed a large number of valuable objects dating from the Antiquity and the Middle Ages.

The sender has been identified as G.G., 24, from the town of Karnobat. Police has searched his house and found inside two metal detectors, and antique iron sword, antique bronze vessel and over 100 other historical objects – jewelry, ceramics, coins and sculptures.

Experts are working on establishing the real value of the objects.