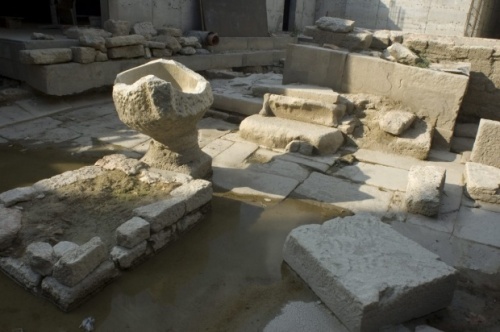 The Cybele temple in Balchik lies in the open. Photo by /log.bg

A commission of archaeologists and architects is set on securing a National Monument status for the temple of Greek goddess Cybele in Bulgaria’s Balchik.

The absolutely unique Cybele temple was uncovered by accident in April 2007 at the construction site of a hotel owned by a local entrepreneur.

The special commission has been appointed by Culture Minister Vezhdi Rashidov in order to figure out how to preserve the temple.

The status of a National Monument is going to bring a total ban of any construction activities in the area of the Cybele temple.

Currently, the invaluable archaeological site lies in the open as it has not been properly conserved because of the dispute of the local authorities with the owner of the plot. The commission plans to build a temporary shelter over the temple.

“We agree to finance the conservation of the temple as long as the Ministry of Culture gives us the legal right to claim it. If we are delayed a bit more, next year there might be no temple to conserve,” the Balchik Mayor Nikolay Angelov has said.

In 2009, he came up with an initiative to expropriate the Cybele temple. However, the owner demanded EUR 1 000 per square meter, or a total of EUR 680 000. The construction of the hotel was halted, and the situation resulted in a stalemate as neither the Municipality, nor any private investor wanted to buy the plot.

The extremely rich temple of goddess Cybele is dated back to the 4th century AD. It is believed to have been shattered, though still well preserved, by an earthquake, or set on fire by barbarian invaders during the reign of Emperor Valens (364-378 AD).