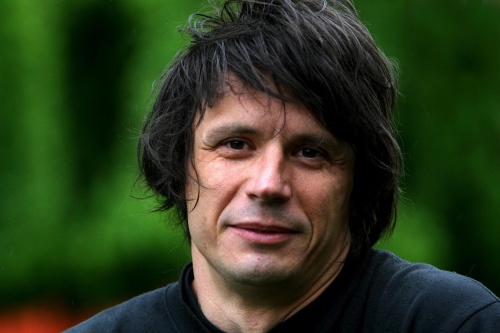 Czech Artist, David Cerny: "I am not a rebel, I am a sculptor." Photo by BGNES

David Cerny (born December 15, 1967 in Prague) is a Czech artist known for his many provoking and controversial pieces. He first gained notoriety in 1991 by painting a Soviet tank that served as a war memorial in central Prague pink. As the Monument to Soviet tank crews was still a national cultural monument at that time, his act of civil disobedience was considered "hooliganism" and he was briefly arrested.

His Entropa, created to mark the Czech presidency of the European Union Council during the first half of 2009, attracted controversy both for its depictions of the various EU member states, and because it turned out to have been created by Cerny and two friends rather than, as promised, being a collaboration between artists from each of the EU countries. Some EU member states reacted negatively with the strongest opposiiton coming from Bulgaria. The country decided to summon the Czech Ambassador to Sofia in order to discuss its representation as a squat toilet. After the Bulgarian Permanent Representation at the European Institutions issued an official objection to the work, displayed at the European Council building in Brussels, the Czech Presidency of the European Union covered the map of Bulgaria with a black cloth. Cerny apologized for misleading his government by presenting Entropa as the work of different EU artists, each presenting their own country, and later returned the money he was paid for creating the display. In May, 2009, the artist took down the installation ahead of schedule in protest against the removal of the government of the former Prime Minister, Mirek Topolanek, and its substitution by a team of "pirates", as he himself called the new Czech Ministers. In October 2009, Cerny was invited to Bulgaria by a local curator to attend the opening of the exhibit “European Art 20 Years after the Iron Curtain” where the black cloth, reportedly, was going to be displayed. The Mayor of Bulgaria’s second largest city Plovdiv, from the nationalist VMRO party, banned Cerny's visit, stirring another huge controversy in Bulgaria and, allegedly, prompting the artist to cancel his plans to visit Bulgaria.

This week, in a rare move, Cerny agreed to give a brief phone interview to Novinite.com.

Mr. Cerny, where does this interview find you? Do you live in the Czech Republic now or in the US?

This is somewhat of a personal question, but I can tell you that I am in Prague, however, I go to the US once in a while. It really does not matter because I see myself as a Citizen of the World.

You have been called many things – a rebel, a prankster, a person who likes to shock and defy and much more? Who is David Cerny?

No, I do not see myself as anything of the above. I am a sculptor. I make art. Period.

This art has been a subject to controversy as well – the public and critics see it between the work of a genius and pieces that belong to the amusement park. What to you tell the latter?

Everyone has the right to interpret art their own way and to say whatever they want to say. If they think my work belongs to the amusement park, this is fine with me. I really do not care. There are enough people, who like and admire what I do.

When I first approached you with the interview request, you told me you are quite tired of Entropa. Why? You are not an artist who is known to be afraid of controversy?

Well, first of all – I was and am tired physically. It was a tremendous amount of work. It took two years, and it was hard labor to install it, take it down, so I was exhausted. And after I did it – all those questions I had to answer about it... It was really tiring, exhausting, not so much the controversy, but the physical work and the so many questions I was asked.

How did you come up with the idea to use this elaborate hoax with fake biographies of nonexistent artists and why did you decide to use deception?

Here we go again… I have answered this question so many times… It is all over the internet. I am so tired to answer this question, but… I was commissioned by my government to do the exhibit. Initially, I wanted to use 27 European artists for "Entropa", but fell short due to lack of time and money. Instead, we decided to create fictional artists.

What made you see Bulgaria as a Turkish squat toilet?

Oh, of course, the toilet again. Same thing here. Why are you asking me this? I have answered it so many times…

Novinite: I know, but because this interview comes from Sofia. You have not granted many interviews in Bulgaria, as far as I know, just one, very brief, for the Bulgarian National Television, BNT, right after the scandal broke in January 2009. And the toilet is the most important and thorny issue for Bulgaria...

Cerny: Well, if you put Cerny and toilet in any online search engine, you will find my answer.

In the BNT interview, Cerny said: “Everyone decided we see Bulgaria as a toilet, which, of course, is not true. It was not entirely my idea though. We did it with a friend of mine, after talking about how when we were kids we could not travel anywhere, except to East Germany and Bulgaria. But we then had some nice time in your country; we liked it. The one difference, the only one that struck us, was the toilets. We, as kids, were very surprised by them. We have never seen such thing. Yes, many years have passed since then, and we know Bulgaria is a member of the EU, but this was a JOKE, no offense was intended. And if it was taken as offense, I apologize.”

Cerny further confirmed for Novinite.com that the toilet was just a childhood memory and no offense was intended.

After the official protests and the black cloth that was placed in Brussels over Bulgaria’s Entropa image, do you have bitter feelings about Bulgaria? ?

No, I really don’t. I have received from many Bulgarians emails etc, saying they like my art, oppose the censorship, and support me. Some of my Czech friends also visited Bulgaria recently, for some film fest, or something, and told me the same thing – Bulgarians like you and your work. As far as the official reaction, such as the black cloth and the complaints – I DO NOT care about officials. At all. The other day, I had to shake the hand of the Czech Prime Minister, and he was very nice and friendly, but I know he does not care about me, and does not like me. And I do not care about him…

After the nationalist Mayor of Plovdiv banned your visit, you made the decision to not visit Bulgaria, despite the fact that Prime Minister Borisov said he would accept you, the Plovdiv Governor, the Culture Minister and the Union of Bulgarian Artists stood firmly behind you. Why?

Oh, I do not go to all exhibits, even when my work is presented. I just was very busy at the time, had many other things to do.

I read the installation will be sold to a private collection? Where is Entropa now?

I wish. I really want to know where did you get this information from. I want to sell it, but no one has approached me about it. I still have it.

And what are you working on now?

I have been keeping very busy. I have several projects going one – one project for Poland, a couple of local ones, some exhibitions around Europe, and next year I have two projects in the US.