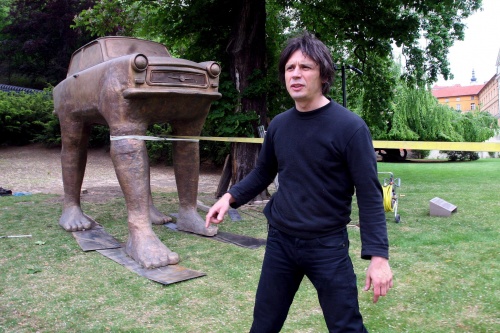 Czech artist, David Cerny, who stirred a heated controversy with his Entropa exhibit, says he does not harbor any hard feelings about Bulgaria.

In an interview for Novinite.com, the sculptor, who depicted Bulgaria as a squat toilet in his Entropa piece, firmly denied being bitter about Bulgaria's reaction about the image.

In January 2009, the artist created Entropa to mark the Czech presidency of the European Union, attracting controversy both for its depictions of the various EU member states, and because it turned out to have been created by Cerny and two friends rather than, as promised, being a collaboration between artists from each Eu country. The strongest reaction come from Bulgaria with the summoning of the Czech Ambassador to Sofia to discuss the squat toilet image. After the Bulgarian Permanent Representation at the European Institutions issued an official objection to the work, displayed at the European Council building in Brussels, the Czech Presidency of the European Union covered the map of Bulgaria with a black cloth.

In the interview Cerny reiterates his explanations that the image of the toilet was just a childhood memory, no offense was intended, and if it was taken, he offers apologies. The artist further points out that the black cloth was just the official reaction and he never cared about officials, adding he knows from emails and friends, who have visited Bulgaria that many Bulgarians like his art and support him. Cerny confirms he likes Bulgaria.

After the scandal with Entropa flared up, the artist said on several occasions: "We knew the truth would come out. But before that we wanted to find out if Europe is able to laugh at itself."

Cerny also denies reports that when the nationalist Mayor of Bulgaria's second largest city - Plovdiv banned his visit there, he gave up plans to travel to Bulgaria because he was offended and explains the cancellation of the trip with being very busy at the time.

Regarding the future of Entropa and his own, the artist rejects reports the sculpture is going to be sold to a private collection soon, adding he, himself, is very busy with several exhibits around Europe and projects in the Czech republic and abroad – Poland and the US.