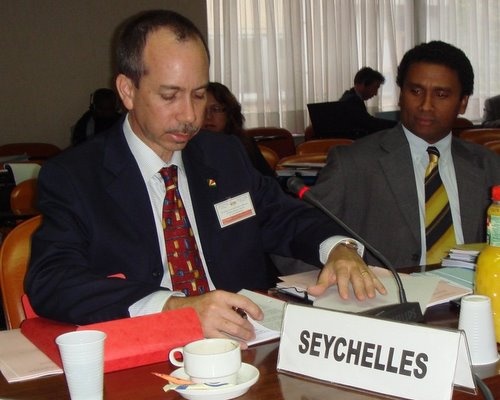 Minister Joel Morgan (left) is the head of the Seychelles Committee on Piracy. Photo by acpsec.org

Interview of Novinite.com (Sofia News Agency) with Joel Morgan, Minister of Environment, Natural Resources and Transport of the Republic of the Seychelles, and Head of the Seychelles High Level Committee on Piracy.

How would you characterize the effects of the activity of the Somali pirates on the Republic of Seychelles? What are the various ways in which your country has been affected? What are the trends in this respect?

At its height, in the first half of 2009, piracy activities in our region created havoc for our small and fragile economy. Maritime attacks were carried out on all types of vessels transiting in our waters disrupting the entire spectrum of maritime activities, thus posing a direct threat to our fishing and tourism industries, the two main pillars of our economy. With our own nationals taken as hostages, the country had no choice but to react swiftly and wisely

What measures is the Seychelles government implementing in order to tackle the issue? How do you evaluate their success?

The Government of Seychelles assessed the dangers that the piracy in the Somali basin presented to its territory, and work was started in April 2009 to form an anti-piracy plan.

Following this in July 2009, President James Michel created a High Level Committee on Piracy under my direction, which started to work on strategies to take action against the problem. The team is made up of all those who take part in the combat against piracy such as the Coast Guard, the Police, the Armed Forces, the Prison administration as well as the Foreign Affairs Ministry, so that together we coordinate the anti piracy activities.

We launched Operation Dauban which involved a 24 hour surveillance plan for the Seychelles Coast Guard, and we deployed ground troops to our outer islands where necessary. We also worked on an agreement with our international partners for the transfer of suspected pirates.

Since September, the Coast Guard together with other international coalitions at sea, has established a dissuasive and operational presence at sea. The proof of this professionalism was evident during the arrest of 11 suspected pirates last December, when the Coast Guard was able to capture the men together with their arms and ammunition.

It is clear however that with the immensity of our exclusive economic zone (1.3 million square kilometres) which is about the size of Western Europe, it is not conceivable that we would be able to guarantee the security of our waters on our own.

We have actively engaged our international partners and together we have been able to enter into various agreements and formulas all targeted towards creating better Domain Awareness of the maritime area under our control, thus allowing the conduct of joint operations to suppress acts of piracy in the Indian Ocean area.

The basing of foreign military assets on our soil, assistance to revise our legislations and various training packages for our security forces are just a few examples of cooperation derived from active engagement of Seychelles towards finding sustainable solutions to the piracy threat.

How do you see the effect of the international naval missions in the Gulf of Aden – especially that of EU NAVFOR Somalia? Do they lead to increased threats for the Seychelles as the pirates have been forced to move to the east and south? Are you concerned that pirate groups could pose a direct threat to your territory – i.e. by landing on some of the islands?

We work in close cooperation and coordination with the EU NAVFOR and the Atalanta Operation. The other forces in the region such as the US, NATO and India also help us and I am very pleased to witness a real international mobilization on this fight against piracy.

President Michel has through his diplomatic efforts created the foundation for an anti-piracy hub in Seychelles for the naval forces in the region. However, a larger deployment of naval forces is necessary.

I do not believe that the pirates are moving southward because the EU NAVFOR has moved southward.

We have ground troops stationed on our islands to secure our land, and therefore we do not believe that the pirates group pose a threat to our territory.

As per their current mode of operation the pirates feel very secure whilst operating in open sea where they have freedom of movement; using a hijacked vessel they are able to sail safely back to Somalia uninterrupted by any naval forces because of the risk involved for the hijacked crew. Therefore, it is not in their advantage to land on any island and risk being cornered by military forces.

In September 2009, the Seychelles government repatriated 23 pirates who could not be sued for lack of evidence. How can such legal issues with respect to punishing alleged pirates be resolved so that there could be some prevention from that perspective?

The case of the 23 suspected pirates which we deported to Somalia is very simple and I had the opportunity to clarify this subject on many occasions.

Faced with a lack of evidence to prosecute the suspected pirates we were forced to set them free. We are a state which respects international law, as well as the justice system of our republic and we had no other option but to release them. Other nations have also reacted in a similar manner when there is no evidence.

It is very difficult to prove actions of piracy. The court case which will take place in a few weeks time in Victoria will be an example of this, although we have strong evidence against the 11 suspected pirates we arrested in December. We are revising our laws on piracy in order to reflect the modern piracy problem more effectively.

A number of experts think that the only ones who stand to lose from the Somali pirates’ activities are the ship crews as the major powers are not directly affected, and therefore not very willing to commit great resources to tackling the problem, while insurance covers any damage done to ship operators and companies. What is your reaction to that, do you think the international community really has strong incentives to take action?

There is a strong collective effort by the international community to fight against this new threat; the insurance companies, operators, owners, and I think the problem has been treated sufficiently for the moment.

If not tackled appropriately piracy could become a very serious problem having a catastrophic consequences for maritime trade all over the world. Therefore, it is in the benefit of maritime nations and landlocked States alike, to support efforts to tackle this issue, urgently.

How can minor powers such as Bulgaria contribute to that, in your view?

Bulgaria, together with all nations which uphold the rule of law and are concerned with justice, should participate in the international effort to combat piracy. Like other countries, Bulgaria should also support diplomatic efforts to bring about peace and stability in Somalia.

Where are the roots of the Somali pirate problem? Are the claims justified that other nations caused it to appear by fishing indiscriminately and dumping toxic waste off the unguarded Somali coast since the 1990s?

The roots of piracy which we see today on the Somali coast are derived from the lawlessness in the state of Somalia, which has existed now for more than 20 years.

The Somali government structures are not strong enough to ensure the rule of law. A state of war and insurrection has left the country open to illegal activity which has enabled the development of piracy. This new activity generates a strong revenue and orginates more from a ‘business’ model than from a political or ideological struggle.

Despite all that, it is imperative that the international community respect the sovereignty, territorial integrity, political independence and unity of Somalia, including Somalia’s rights with respect to offshore natural resources, including fisheries, in accordance with international law.

How do you see the solution of the Somali pirate issue? What is the best way for the international community to deal with it so as to achieve a sustainable solution?

As I have said before, the roots of piracy lie in the state of lawlessness and insecurity in Somalia. We are committed to support all initiatives that aim to bring peace and stability back to Somalia.

Piracy is not just a problem for seafarers who might fear a pirate attack. The revenue gained from piracy, as well as the illegal activities taking place on Somali soil, pose a real risk for regional destabilization. The international community needs to help Somalia reach a political and structural solution and to achieve the restoration of the rule of law into the country.