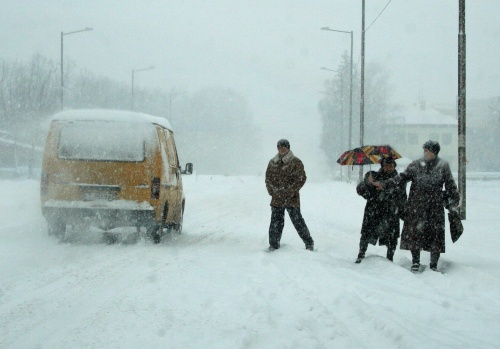 The heavy snow continues to create significant problems all over Bulgaria Wednesday, with the situation being the most serious in eastern Bulgaria.

Three municipalities in the Varna Region – Vetrino, Aksakovo, and Suvorovo, have declared emergency since Tuesday with many roads closed and bus services suspended. The roads are also closed for cars between the cities of Varna and Dobrich and to and from the city of Shumen. Trucks are required to have chains.

Part of the "Hemus" Highway near Varna is unaccessible. Many schools in these Regions have canceled classes even tough the Education Inspectorate decided to resume classes in the city of Varna, but says this decision might be altered, according to the situation. The Varna airport canceled two morning flights.

Cars, buses and trucks have been stuck in the heavy snow in many locations in northeastern Bulgaria and passengers have been rescued by the Civil Defense teams.

The Rishki mountain pass is closed for trucks; chains are required for automobiles.

The road surface on the “Trakiya” highway in southern Bulgaria is wet and covered with light snow. The stretch between the city of Burgas and the town of Karnobat is closed and traffic is diverted through the town of Aitos.

Roads are wet ans slippery all over the country and chains are mandatory in areas with higher elevation and in mountain passes.

Sofia airport is open and there are no delayed or canceled flights.

The traffic in the Bulgarian capital Sofia is currently impeded, even though the major arteries have been cleaned up. Public transportation is experiencing delays. Drivers have been advised to be extra careful because roads remain slippery. Pedestrians face treacherous walking for many sidewalks still haven't been cleaned.