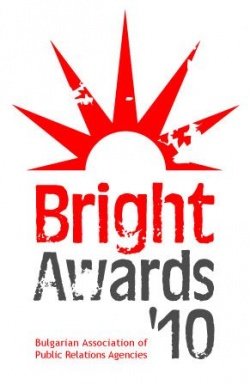 The official logo of the BAPRA Bright Awards 2010. Photo by BAPRA

The Bulgarian Association of PR Agencies has announced the start of a new initiative – a prestigious competition with an international jury entitled “BAPRA Bright Awards.”

For the first time a Bulgarian PR contest is going to have a jury made up entirely of foreign experts. The BAPRA Bright Awards jury will be chaired by the world farmous PR guru with a 20-year experience Paul Holmes, founder of The Holmes Report.

All Bulgarian public relations agencies will be able to participate in the award contest with campaigns that they carried out in 2009. The Bulgarian PR Agencies Association (BAPRA) is going to accept submissions with nominations starting March 16.

The BAPRA Bright Awards will be handed in six categories: “Sustainable Development Campaign”, “Special Event”, “Innovative Campaign”, “Campaign Realized by an Internal Department”, “Communications Campaign of the Year”, and “PR Agency of the Year”.

The main criteria for awarding the prizes are explicitly based on innovation and achieviment of the goals set by the clients.

Bulgarian PR companies will be able to submit their nominations between March 16 and April 4 on the website of BAPRA, www.bapra.bg.

The Bright Awards finalists will be announced at a gala dinner with the participation of the international jury at the end of April 2010.

“We believe that finally there will be a fully independent and entirely professional contest for the achievements in the Bulgarian PR business. The BAPRA Bright Awards are going to provide an objective assessment of the Bulgarian public relations market because the largest and most renown PR companies in the country are members of BAPRA. Attracting foreign PR experts in the jury is an opportunity for all of us to see how the land lies, and to stimulate the development of the PR market in Bulgaria,” stated BAPRA Chair Maxim Behar.