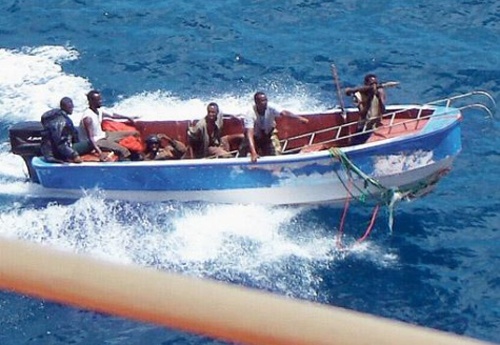 A flurry of recent activity involving naval forces and small vessels in the Gulf of Aden has resulted in several pirate crews being arrested, but successful hijacking of cargo ships continues. Photo by nato.com

The Turkish frigate "Gemlik" has encountered a small skiff in the Gulf of Aden, and captured seven alleged pirates.

The naval vessel, which is serving under an international mission to fight off piracy in the Gulf of Aden, encountered a suspicious boat in the security corridor used by commercial shipping, some 60 kms offshore.

Turkish SAT Commandos (the Underwater Assault Team) boarded the small boat and seized the seven men, along with an assault rifle and equipment used in pirate operations, according to the Turkish Military Headquarters web site on Saturday.

The group has been detained, suspected of preparing to launch attacks on commercial vessels in the area.

Meantime, pirates are reported to have hijacked a Norwegian chemicals tanker, the "UBT Ocean" along with her crew of 21. On Monday, March 1, a Saudi-owned tanker was captured, with a crew of 14 aboard.

There were several reported incidents on March 4 and 5, as the pirates take advantage of calm seas to launch their attacks, and have engaged in a flurry of activity in anticipation of the onset of the rainy season.

In the most serious skirmish on Friday, six pirates attacked a vessel before breaking away and chasing a French fishing boat, said Cmdr. John Harbour, spokesman for EU NAVFOR, the joint European naval protection force.

The French Defense Ministry reported that one of its frigates had intercepted 22 suspected pirates Friday in two separate operations. It said the pirates are currently aboard the vessel along with their skiffs.

Friday's clashes followed a firefight on Thursday between pirates and private security contractors onboard a Spanish fishing vessel. The pirates hit the ship with a rocket-propelled grenade and the guards returned fire.

There were no casualties, but the International Maritime Bureau has expressed its fear that the increased use of armed contractors could trigger an arms race between fishermen and pirates, who are firing at ships with increasing frequency.

The 5 Bulgarians and the reminder of the crew of the "St James Park" remain in captivity. One of the Bulgarians succeeded in calling a Bulgarian newspaper, asking for help, and describing the situation as desperate. Negotiations are continuing for the safe release of the ship and her crew.

The other ship with Bulgarian crew members, the "Asian Glory", was released by pirates on February 19, on payment of a USD 5 M ransom.