The Bulgarian 'Loch Ness Monster': the Water Bull of the Rabisha Lake 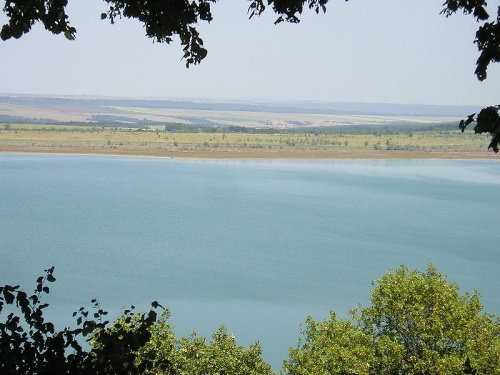 The Bulgarian Loch Ness - the Rabisha Lake. Photo by infotourism.net

Nessie vs. the Bulgarian Water Bull

The world famous monster Nessie from the Loch Ness in Scotland is about to get a rather tough competitor – the Water Bull from the Rabisha Lake in Northwestern Bulgaria.

Even though the Water Bull and Nessie seem to be of very different species, the Water Bull of the Rabisha Lake is set to conquer the world going in the footsteps of the Loch Ness Monster, Emil Tsankov, Mayor of the town of Belogradchik has told Novinite.com (Sofia News Agency).

Belogradchik is a small, though, rather famous and picturesque town in the Bulgarian Northwest. First and foremost, it is known for the Belogradchik Rocks – absolutely miraculous rock formations stretching for some 30 km in the western part of the Balkan Moutain (Stara Planina).

Over the past year, the Belogradchik Rocks did pretty well in the competition for the New Seven Wonders of the World, and even though they failed to make it to the finalists, they have found a spot on the prestigious reserve list. The other amazing thing near Belogradchik is the Magurata Cave with its enchanting paintings by prehistoric people.

And the third world-class tourist attraction the Belogradchik Municipality wants to add to its portfolio has to do with the Monster of the Rabisha Lake.

Mayor Emil Tsankov has submitted an application to the EDEN (European Destinations of Excellence) contest, a EU-wide project focusing on sustainable development. The topic of the 2010 edition of the contest is “Water as a Force of Life and Prosperity” which made the Rabisha Water Bull a rather logical participant.

With the funding that the Belogradchik Municipality hopes to get, it plans to promote the legend about the Rabisha Lake Monster and to resurrect the local traditions related to the mysterious creature.

The Rabisha Lake (“Rabishkoto Ezero” in Bulgarian) is located between the villages of Tolovitsa and Rabisha, in the Belogradchik Municipality, to the northwest of Sofia.

It is the largest lake in Bulgaria’s interior even though with its area of about 1 square km it is much more modest in size than the Loch Ness.

The Rabisha Lake has a tectonic origin. It was formed in the Quaternary Period, some 2,5-3 million years ago, and its depth reaches 30-40 meters.

“The lake has never been explored in detail so it is not unknown exactly what sorts of species from previous periods it is the home of,” Mayor Tsankov told Novinite.com.

One thing that stands out about the Rabisha Lake is the fact that it is an endorheic lake – no rivers flow out of it. This has turned it into the object of many folk tales and legends of medieval Bulgarians who believed that water had to be in circulation all the time.

Thus, the people in the region thought the lake was bottomless, and was therefore the home of many scary creatures common to the Slavic mythology.

The Legend about the Water Bull, the Rabisha Lake Monster

There are various legends about the Rabiska Lake Monster but Mayor Tsankov has picked the most “credible” one – which dates back to the 18th century – in order to focus their project on it.

The legend has it that a fearful monster inhabits the lake. Unlike Nessie and many other lake monsters, however, this one is no dinosaur; it is a lot more human-like, and is actually more like a minotaur.

The Rabisha Lake Monster, the so called Water Bull, has the head of a bull, the body of giant, strong man, and the tale of fish.

In order to keep this terrifying beast at ease, the local people would offer as a sacrifice to it the most beautiful young girl in the entire region in order to buy their safety. They would hold a procession taking the girl to the Rabisha Lake where it would get on a boat together with many wonderful gifts, and would fall pray to the monster.

It is exactly this procession with a gorgeous young girl, lavish gifts, and songs and dances that a major focus of the project to revive the Rabisha Lake legend, together with some other traditional folklore customs of the region. These customs and ceremonies will be shown to tourists and guests, and they will actually be invited to participate in them.

“The terrible story of the annual sacrifices to the Water Bull actually has a happy ending,” Tsankov explains with a smile. “The most gorgeous girl in the world was born one day in the village of Rabisha. When she grew up and the time came to offer her as sacrifice, she was placed in a boat and taken to the middle of the lake.

“However, when the Water Bull saw her, he was so enchanted by her that instead of killing her, he fell in love. He asked his sister, who was a sorceress, for help, and with her powers she made the beautiful girl immortal. The Water Bull took his young wife to the bottom of the Lake, and never came back for more prey. The two of them are still believed to live happily down there.”

What might have given rise to such a legend (there are actually a number of local legends about the Water Bull Monster in the Rabisha Lake which have slight variations)? Assuming of course the actual Bull doesn’t hang around down there.

The Rabisha Lake is actually proven to be the home of real water monsters – gigantic wels catfish have been caught there. The largest ones reach 5 meters in length, and a weight of 350 kg!

The Belogradchik Mayor says there are also various reports of spotting these fish monsters near the surface of the Rabisha Lake – mostly in the months of April and May – even though the wels catfish usually spend most of their time on the bottom of the lake.

“This huge fish – a real monster – might have been the cause of the Water Bull legend in the first place,” Tsankov thinks.

Legend or no legend, the development of a brand new tourist product has been initiated, and the 24 Chasa Daily and the Belogradchik Municipality have already announced a competition for taking a photo of the Rabisha Lake Monster, and everyone is welcome to participate.

Hopefully, the photos of the enthusiasts rushing there will not capture any dinosaur, Nessie-like monster in the lake as this is going to throw into disarray the tidy plans of the municipality about its Water Bull.

Of course, Mayor Tsankov actually is much in favor of advertising the Water Bull as “the Bulgarian Nessie” in order to benefit from the world renown of the Loch Ness Monster.

Belogradchik Has Seen the Future and It Works

It seems that thanks primarily to the enterprising character of Mayor Emil Tsankov and his team, the small town of Belogradchik is going to find its way of sustainable local tourism rather then descending into poverty like so many other towns and villages across Bulgaria with big but neglected potential.

The Bulgarian Nessie is supposed to boost these figures even further. It will most certainly do so because it seems to be even cooler than the Loch Ness Monster – after all, the Water Bull turned out to be the hero of a great love story.