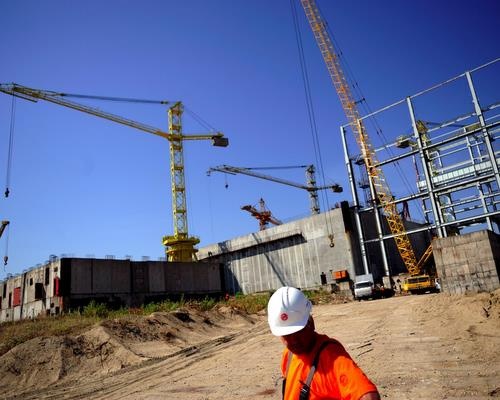 A file picture dated 03 September 2008 showing workers during the construction of the first 1,000 MW unit of the second nuclear plant of Belane, Bulgaria. Photo by EPA/BGNES

As Russian prime minister Vladimir Putin announced the allocation of 53 billion roubles (.77 billion) of federal money towards the construction of new nuclear power in 2010, the country could also be poised to buy into a Bulgarian nuclear power plant.

Putin announced the funding for domestic new build in a meeting on investment in the Russian power industry on 24 February.

As well as the funding for new reactor construction, the Russian government has confirmed a development program that will see fast neutron reactors become a technological priority in the next decade. Plans call for the continuation of the existing sodium-cooled fast reactor program with units of about 800 MWe, with a 100 MWe lead-bismuth-cooled fast reactor, known as SVBR (Svintsovo-Vismutovyi Bystryi Reaktor ) to be built by 2015. This is to be followed by a lead-cooled 300 MWe BREST fast reactor by 2020.

In addition, a 150 MWt multi-purpose fast research reactor (MBIR) is to be built by 2020. The total fast reactor budget to 2020 is about 60 billion roubles ( billion), largely from the federal budget. The program is intended to result in a 70% growth in exports of high technology equipment, works and services rendered by the Russian nuclear industry by 2020.

Separately, Russia could be on the verge of taking a controlling share of Bulgaria's Belene nuclear power plant only days after Bulgaria turned down the offer of a €2.0 billion (.7 billion) loan from Rosatom to finance the construction of the plant. According to Rosatom head Sergei Kiryenko, Russia is planning instead to invest €1.9 billion (.6 billion) in the project over the next two years. The funding would be provided on the understanding that the investment would be made on a temporary basis, but if the Bulgarian government was unable to find another investor, then Russia would become a stakeholder taking up to a potential 80% share in the station.

This would mean that Belene could effectively become the first foreign nuclear power plant to be owned by Russia.