Bulgaria Trakiya Highway Extension to Proceed in May 2010 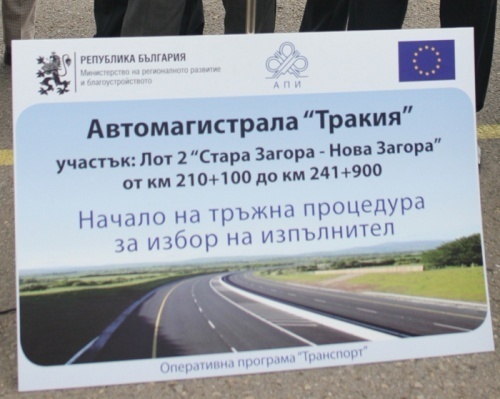 Bulgarian Minister of Regional Development Rosen Plevneliev officially confirms the winning consortium for construction of the next section of the Trakiya Highway. Photo by BGNES

Bulgaria's Regional Development Minister, Rosen Plevneliev, has officially confirmed that construction of the next section of the Trakiya Highway will go ahead as scheduled, on May 3, 2010.

Plevneliev announced on Friday the official decision on the winner of the contract for Lot 2 of the highway, the new section that will link Stara Zagora and Nova Zagora.

"Unified Highway Trace will build the section of Stara Zagora - Nova Zagora with a length of 31.8 kilometers. The proposed price for executing the contract is BGN 137 868 000, and this is also recorded in the official decision," the Minister stated, referring to the announcement of the selection committee on Thursday.

Bozhidar Yotov, Head of the Road Infrastructure Agency (RIA), stated that 66 companies had purchased tender documents, and eight had been involved in the procedure itself.

Four of those bidders had been disqualified because their documents were not in compliance with the terms of the Public Procurement Act, he explained.

"The selection commission has thoroughly examined the offer of "Unified Highway Trace", and conscientiously carried out its duty," said Yotov.

He further announced that the RIA Board had decided to publish the contract for construction of Lot 3 of the Trakiya Highway, which is to be built between Nova Zagora and Yambol.

The winning consortium, "Unified Highway Trace", reacted to the official announcement, stating that it welcomed the decision of the Bulgarian government.

"We believe that without any extra cost the highway section will be built to satisfactory quality standards. We will ensure completion by the end of the 25th month, and guarantee a reliable operation," the company announced.