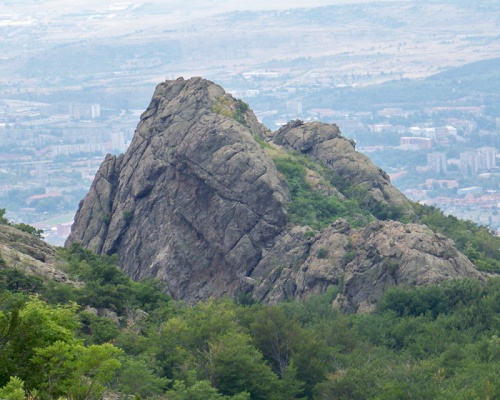 The eastern Bulgarian 'Blue Stones' Natural Park is threatened by illegal moves by Sliven Municipality, according to a coalition of conservationists. Photo by bg.wikipedia.org

A coalition of Bulgarian ecologists, claimed on Thursday that Sliven municipal council had approved a proposal put forward by the town’s Mayor, Yordan Lechkov, to transfer the land to the municipality.

The council agreed on February 18 that the Mayor should ask the Bulgarian Council of Ministers, via the Governor of Sliven, for a transfer of the property without compensation.

The park, situated in eastern Bulgaria, is part of the Balkan Mountains chain, occupying a total area of over 11 000 hectares of which 90% is currently state property.

The eco-coalition "Let the Nature Remain in Bulgaria" maintains that the decision was unlawful because the Blue Rocks Park is part of a European network of protected areas under Natura 2000.

They point out the park is also subject to the Directives on Conservation of Habitats and on the Protection of Birds.

The park is mostly covered with deciduous forests of Moesian beech. The "Red Book of Bulgaria" includes some 80 plant, and 60 bird species such as the Eurasian Hobby and Eastern Imperial Eagle, that are found there, as well as six species of plants, including Tulipa urumoffii, that are designated as endangered worldwide.

Under the Bulgarian Constitution, the responsibilities for biodiversity conservation and management of the national ecological network are a government commitment on behalf of the executive power, while various owners, including municipalities, are responsible only for their property.

The conservationists say that the Mayor's plans for Blue Rocks Park are clear - to turn it into an urban entity and open it up for development.

They also claim it is no secret that the Mayor has ambitions to create a ski resort in the "Daulite" area of the park, where there is now a small ski slope. This, despite the fact that the highest point in the Sliven Balkan, Mt Balgarka, is only 1 181 meters high.

"The state must be aware that this is an attempt to local feudalization which can have dangerous consequences for more than 60% of protected areas in the country," warned the coalition.

The group has already alerted the regional Governor of Sliven and the Regional Inspectorate of Environment and Water - Stara Zagora, with a request for the decision to be revoked. The owner of the state forests in the Blue Rocks Natural Park - the Forestry Executive Agency - has yet to present its opinion.