Jurgen Roth Steers Clear of Bulgaria, Fears for His Life 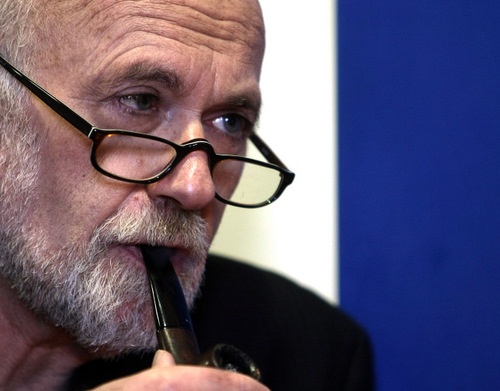 “What is important for me is that my safety is guaranteed, especially after the threats that I have received from Rumen Petkov,” Jurgen Roth said in an interview for Deutsche Welle. Photo by BGNES

Renowned German publicist Jurgen Roth has decided not to come to Bulgaria for the second hearing of a slander trial against him, due on Monday, saying he fears for his life.

“I have not received so far any signs that the Bulgarian authorities will guarantee my safety and you can be absolutely sure that I will not turn up in the court room,” Roth said in an interview for Deutsche Welle. “I will be represented by my lawyer, who will show the evidence that I have.”

Bulgaria's former Interior Minister Rumen Petkov is suing the German investigative journalist over alleged slanders against him in his book about organized crime in Bulgaria, entitled "The new Demons”.The former minister demands that Roth pays him BGN 10,000 in damages.

In the book Roth cites sources making scandalous statements that Petkov has relations to organized criminal networks and is involved in the production of synthetic drugs in Bulgaria.

According to high-level unnamed officials in the Interior, quoted by Roth, the former interior minister personally controls the trafficking of amphetamines from Bulgaria to Turkey and the Middle East, which was the practice of the Security Services during the communist regime. Petkov is also said to have met with criminal figures involved in drug production.

On the eve of the hearing against the prominent journalist, the civil Anna Politkovskaya free speech association, sent an open letter to him, urging him to come to Bulgaria for the trial. The association has assured Roth that they will make sure the country's senior prosecutor and the interior minister be personally responsible for this security. Roth, however, is adamant he is not coming to Bulgaria.

“The Bulgarian authorities should prevent any delays in this trial. I am not afraid. What is important for me is that my safety is guaranteed, especially after the threats that I have received from Rumen Petkov. As long as a former interior minister is keeping up his threats against me and I have no guarantees for my safety, my appearance at the court room is out of the question.” the journalist added.

Roth stressed that it is not so much that he fears for his own life as for the safety of the witnesses, that will be summoned in his defense. One of the witnesses is Vanyo Tanov, former head of Unit for Combating Organized Crime (GDBOP), who is now responsible for the customs.

“I can bet he knows many things about the connections that Mr Petkov has. I consider Mr Tanov to be the main witness to back my claims, even though I have been accused of something that I have never either claimed, nor written,” Roth said.

He refused to disclose names of other witnesses, not only out of fears for their safety, but also because he, as he put it, “will rely on the surprise element”.

Asked whether Alexei Petrov, a former member of the state anti-terrorist unit and former senior adviser at the state national security agency, arrested earlier this month on suspicion of money laundering, racketeering, drug trafficking, bribery and tax fraud, is among his witnesses, Jurgen Roth said he expects him to play a major role in the trial.

The investigative journalist confirmed that he stands behind every single word that he has written and would have done everything in the same way if he had to write his book today, with only one sentence.

“I would add that the current government of Prime Minister Boyko Borisov, fortunately, is moving in the right direction. This is the only thing that I would change, otherwise I see no reason to change anything,” Roth underlined.