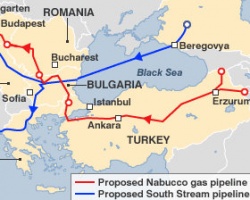 The construction of the Nabucco gas transit pipeline should start by the end of 2011, and should be completed by 2014.

This was announced Tuesday night during an energy strategy forum in Sofia by Christian Dolezal, Spokesperson of the Nabucco Consortium.

Dolezal has made it clear that the Nabucco pipeline will be transiting natural gas from Iraqi Kurdistan, Turkmenistan, and Azerbaijan. He said the complete investment plan and the funding for the pipeline should be available by the end of 2010.

The Spokesperson has defended the feasibility of the EU-sponsored Nabucco project by saying that natural gas demand is going to increase in the long run even though it will fall over the coming years. Dolezal said the gas transit pipe would bring a lot of investments in energy storage facilities and hubs.