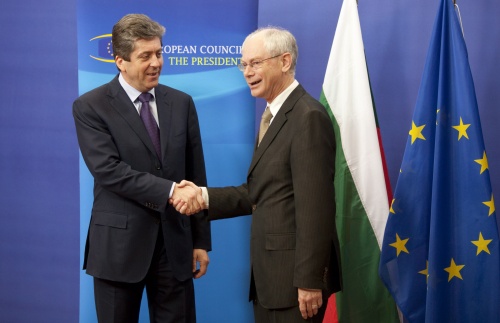 Bulgaria’s President has reacted strongly to a report by a German MEP suggesting that Bulgaria build a nuclear waste facility with part of the EU nuclear decommissioning aid it is to receive.

Earlier on Tuesday, Greens MEP Rebecca Harms presented her report at the EP Committee on Industry, Research, and Energy claiming that Bulgaria was too dependent on Russia in terms of energy.

She has argued that it should use EUR 120 M of the EUR 300 M it would get from the EU as additional compensations over the closure of four of the six reactors of the Kozloduy Nuclear Plant in order to build a nuclear waste storage place of its own rather than ship the nuclear waste to Russia.

“I would not agree in any case to this, we have an established mechanism for the transport and storage of used nuclear fuel,” said Bulgaria’s President Georgi Parvanov, who happens to be on a state visit to Brussels.

Bulgarian MEP from the European People’s Party, Vladimir Urutchev, who is an established nuclear energy expert, has stated that even though the German MEP Harms was right that Bulgaria did not have any facilities for the storage of nuclear waste, that issue was not presently on the agenda.

“These EUR 120 M are destined for the so called “non-nuclear window” of the compensations. The demands made by Harms in her report mean that this money will be blocked and it will be impossible to use it effectively,” Urutchev said cited by the BNR.

He has warned that if the German MEP had her way with the demands made in her report, this could give rise to voices in Bulgaria demanding the reboot of the four closed reactors in Kozloduy.

Bulgaria currently intends to use EUR 180 M from the EU decommissioning aid in order to finish the work on putting the four Soviet-era reactors out of exploitation, and to use the remaining EUR 120 M for various energy efficiency and renewable energy projects.

Bulgarian Liberal MEP, Antoniya Parvanova, who is also a rapporteur on the same topic in the Environment Committee of the EP, said, as cited by the Dnevnik Daily, that the Greens MEP had no legal grounds for her demand, and that EUR 120 M would be too little to create a nuclear waste facility.

According to Bulgarian Socialist MEP and former Foreign Minister, Ivaylo Kalfin, the Bulgarian MEPs are going to propose a number of changes to Harms’s report in order to make sure the EUR 120 M in question will be channeled for green energy.