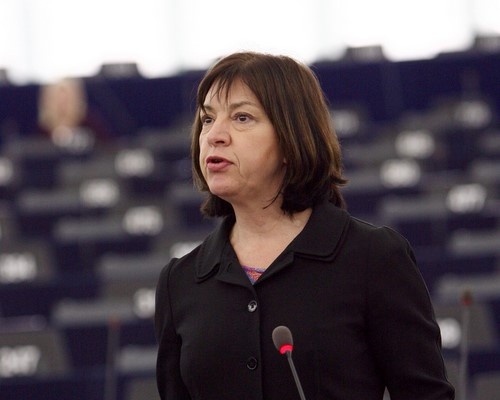 German Greens MEP Rebecca Harms believes Bulgaria is too dependent on Russia for its energy. Photo by EPA/BGNES

A report by a Greens MEP is putting into question the additional EU decommissioning aid of EUR 300 M for Bulgaria over the closure of the Kozloduy NPP.

German MEP from the Greens party, Rebecca Harms, who is a rapporteur in the EP on the proposed allocation of EUR 300 M for Bulgaria because of the closure of reactors 1-4 of the Kozloduy Nuclear Plant, insists in a report that Bulgaria should create a nuclear waste storage facility in order to keep there the used nuclear fuel from the plant.

Harms’s report was discussed Tuesday during a session of the EP Committee on Industry, Research, and Energy.

The German MEP claims that Bulgaria’s entire energy strategy increases its dependence on Russia, as cited by the Bulgarian National Radio. She has pointed that the planned Belene Nuclear Power Plant will be constructed by Atomstroyexport, and that Bulgaria is actively cooperating with Gazprom.

Harms has expressed concern over the fact that Bulgaria ships its used nuclear fuel to Russia as she says it is unacceptable for a state developing nuclear energy to lack a strategy for storing its nuclear waste.

The Greens MEP argues that Bulgaria should allocate at least EUR 120 M from the EUR 300 M of the decommissioning aid it is going to get to construct a nuclear storage facility for used fuel.

The Report of MEP Rebecca Harms will be discussed in by the respective EP Committee in March, and will be voted upon by the EP in April. After that, the EC is expected to start allocating the EUR 300 M to Bulgaria.

In the fall of 2009, the EC and the EU Council approved EUR 300 M of additional decommissioning aid for Bulgaria which had to shut down early its four Soviet-era 440-MW reactors under its EU accession treaty.