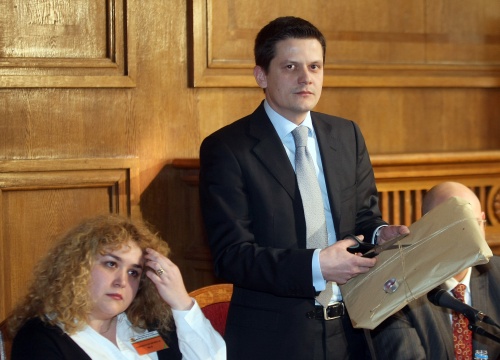 The chairman of the selection committee for the “Trakiya” highway Lot 2 construction, Dimitar Margaritov, during the opening of the bids. Photo by BGNES

The complaint of the Austrian road construction consortium "Strabag" over the “Trakiya” highway public tender with Bulgaria’s Commission for Protection of Competition (CPC) has been rejected.

The news was announced by the Bulgarian National Radio, BNR, Monday.

CPC decided to not consider the request of the Austrians to halt the public tender for building Lot 2 of the highway - the Stara Zagora – Nova Zagora section.

This was the only complaint voicing concerns about the National Road Infrastructure Agency regarding the recent bidding procedure.

The CPC probe concluded the complaint is unfounded. The decision can be appealed with the Court within 7 days. In addition to “Strabag”, three other bidders were rejected.

The group's proposed cost for the project was almost three times lower than the highest offer received, at EUR 2,2 M per kilometer, while in 2005-2007 it had built the section from Orizovo to Stara Zagora for EUR 2,4 M per km. Because of the low price submitted, the company will be asked for additional justification, said chairman of the selection committee Dimitar Margaritov.