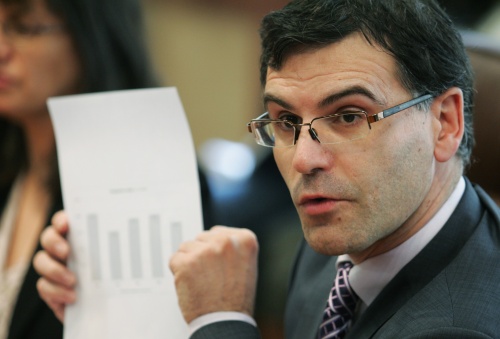 Bulgaria's Finance Minister, Simeon Djankov, speaks to the management of the cigarette and tobacco manufacturing sector at the Council of Ministers building Monday. Photo by BGNES

Bulgaria's Finance Minister, Simeon Djankov, declared the Bulgarian state-owned monopoly Bulgartabac is not behind the large-scale cigarette contraband busted recently in the port of Varna.

Djankov spoke Monday during a meeting with the management of the cigarette and tobacco manufacturing sector, and was adamant the reduced cigarette sales in the country in 2010 are not the result of intensified contraband.

The Minister pointed out that a second probe is conducted in the Varna case, adding the Bulgartabac management is to remain unchanged.

On Friday, Djankov announced that the contraband cigarettes in question had been produced at the Blagoevgrad factory of Bulgartabac.

According to the Minister, the reduced sales are triggered by the fact consumers stockpiled on cigarettes similarly to 2007 when the tax and prices went up because Bulgaria became an EU member state. The second reason, stated by Djankov, is the crisis making some smokers to turn to the use of pipes and cut tobacco.

The trend of lower sales had begun in 2008 as result of the economic crisis.

“The crisis can be a good thing when it leads to less smoking,” the Minister commented.

When asked if he is supporting the proposal of his ruling Citizens for European Development of Bulgaria (GERB) party to not introduce a full smoking ban in the country in June 2010, Djankov replied: “The less the smoking, the better for Bulgaria's economy."