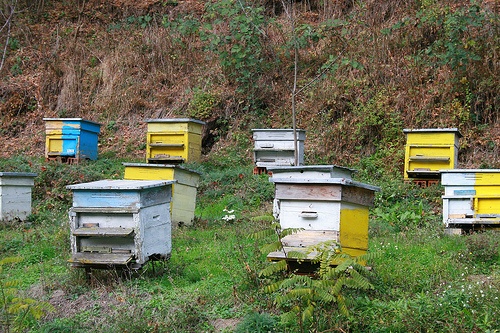 The Bulgarian Parliamentary Committee on the Environment has agreed to extend protected GMO-free areas near organic farmland and registered beehives. Photo by flickr.com

The Bulgarian Parliamentary Committee on the Environment has agreed that GMOs will not be allowed within 7 kms of organic farmland, and 10 kms away from permanent, registered beehive clusters.

They also adopted a five-year ban on the cultivation of GMOs for commercial and scientific research in the field. The document was voted before the new law on GMOs was adopted on second reading.

The committee has accepted these changes to the Law on Genetically Modified Organisms (GMOs) at the proposal of Evdokiya Maneva, Deputy Minister of Environment and Water.

The eco-ministry had originally suggested a restriction of 7 kms for both organic farmland and beehive farms, until Peter Kurumbashev, a Coalition for Bulgaria MP, had suggested the distance from apiaries be increased to 10 kms.

Ilia Tsonev, a beekeeping industry representative agreed that this was a reasonable distance from stationary apiaries.

Having heard the opinions of MPs and NGOs, Nona Karadzhova had agreed to the extended barrier.

"At the moment, throughout the country, the cultivation of GMO types permitted in the EU is allowed, and no one has asked himself where the bees fly. This goes beyond any boundaries of responsible behavior," the eco-minister commented. She asked again why, in 2008, cotton had been omitted from the prohibited list for field trials with GMO cultures.

The committee of MPs also supported a proposal for the introduction of larger, more distinguishable lettering on product labels that indicate GMO content.

Socialist MPs had earlier urged the government to withdraw the legal changes, and had criticized the 5-year moratorium on the spread of GMOs proposed by the ruling GERB party.

"Our impression is that the moratorium is another "fake" running of the government before the wind, not even in this case knowing where the wind is blowing from. We asked that this point be removed from the agenda, because we need to know first what we are prohibiting, what kind of law we are adopting, and only then to know why we are introducing this moratorium," said Petar Korumbashev of the BSP.

The opposition also commented that this was a populist decision, because the ban applies only to Bulgaria.

Meanwhile, the Initiative Committee of parents and citizens handed the Speaker of Parliament, Tsetska Tsacheva, an e-petition containing almost 16 000 signatures protesting against the amendments to the GMO Law. The petition insisted on keeping the ban in the law for the release of GMOs into the environment, as well as in protected areas and 30 km around them.

The Speaker said that GERB was willing to consider very precisely the wording of the changes between the first and second reading of the law, and that it would strictly comply with existing national and international acts,

Tsacheva later attended the deliberations of the Committee on amendments to the law, and invited representatives of the Initiative Committee, along with members of the Parliamentary Committee on Environment and Water, to comment on the texts of legislative changes.