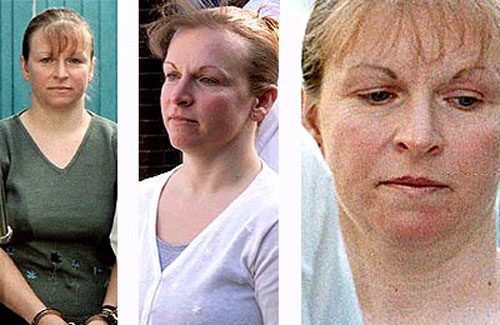 Thompson first came to the UK police’s attention in 2000 when she was acquitted of trying to kill her husband with a baseball bat and carving knife during a bondage sex session. Photo by channel4.com

The ‘Black widow’ Dena Thompson, from Devon in the UK, was convicted to life in jail in 2003 for murdering her second husband Julian Webb on his 31st birthday.

The UK authorities mounted a large scale search, immediately after the conviction, to find all of Thompson’s previous boyfriends fearing that they had stumbled upon a serial killer – This search took them and Interpol all the way across Europe to Bulgaria, where Dena had been a regular visitor during the late 1970s and early 1980s.

Thompson’s Bulgarian boyfriend, Stoyan Kostov, however was never traced and the fear is that he became a victim of the ‘Black widow’.

The police and Interpol investigation was stopped after revealing no evidence of further murders but now UK journalist Adrian Gatton, who has a background in making documentaries for the BBC and Channel 4, is investigating the case for a book on Thompson and believes there is far more to her Bulgarian story than meets the eye.

Det Chief Insp Martyn Underhill, of Sussex police, who investigated Thompson in the UK, said: "This woman is every man's nightmare. For a decade she has targeted men sexually, financially and physically. I, for one, am very glad to see her behind bars."

Thompson, who also went under the names Dena Lynn Holmes (maiden name) or Dena Lynn Wyatt or even maybe Dena Lynn Webb, first came to the UK police’s attention in 2000 when she was acquitted of trying to kill her husband with a baseball bat and carving knife during a bondage sex session.

Thompson, 40, was however jailed for three years and nine months at Lewes Crown Court on 15 counts of deception involving thousands of pounds that she stole from her husband Richard, 42, and two other lovers.

After the jury found her not guilty of trying to kill her third husband as he lay tied up and naked on the bathroom floor of their home in Rustington, West Sussex, in January, police announced that they were re-opening the investigation into the death of Julian Webb, Thompson's second husband.

The prosecution claimed that Thompson had attempted to kill her husband because he had discovered that she had lied about winning GBP 300 000 on the National Lottery and that the money she had was, in fact, stolen from him and other men.

During the trial Thompson admitted that her husband was not the only one she had defrauded - she was jailed for 18 months for stealing GBP 36 000 from her former employer, the Woolwich building scoiety, by setting up bogus accounts. She also admitted that she defrauded a former boyfriend of GBP 5 000 which he never recovered, and that she lied to a man called Robert Waite, promising him a new life in America and telling him she had cancer.

After the three year long investigation into the death of Webb, Thompson was taken back to court this time she was found guilty and sentenced to life in jail.

The Recorder of London, Michael Hyam, told Thompson that her crime was "utterly ruthless and without any pity", adding: "Nothing can excuse you for the wickedness of what you did."

The jury was told that Thompson poisoned Webb with large doses of anti-depressants and aspirin disguised in a curry because she feared that he was about to discover that their life together was built on lies and deceit.

One of the main motives for the murder was allegedly that Thompson wanted Webb's GBP 36 000 death benefit and made inquiries about it soon after she killed him.

During the trial another of Thompson’s first husband electrician Lee Wyatt also claimed that she spun him a web of lies after their marriage and later tried to frame him for theft from Woolwich.

Wyatt added that he spent years on the run believing Thompson's story that the family were in danger from the Mafia.

Thompson herself was caught up in the gymnastics scene when she was young, although she never competed - her father, Michael Holmes, was very involved in the sport and this is allegedly how her Bulgarian connection developed.

After her murder conviction UK authorities immediately started to delve into her past. This led them to Stoyan Kostov from Svishtov who had been her boyfriend in the the late 70s and 80s.

Det Chief Insp Martyn Underhill said in 2003 that he was anxious to trace Kostov (last known address: 27 K.D. Avramov Street, Svishtov) but found that he had disappeared. "We cannot rule out the possibility that other partners have been injured in some way," Underhill concluded.

Thompson made repeated visits to Bulgaria in the 1970s to meet Kostov and according to Gatton “Some sort of incident seems to have happened in Bulgaria but we don’t know what it was.” Gatton also questioned the extent of the operation carried out by Interpol and suggested that West Yorkshire police had never visited Bulgaria.

Thompson continued to visit Bulgaria in the early 1980s, with her gymnastics connections said to be the reason, however fears that Kostov may have been one of her earliest victims mean that much mystery shrouds her Bulgarian connections. With the police investigation now closed will we ever find out the real truth?

Novinite.com is now investigating alongside Gatton into whether something happened to Thompson in her late teens, during her visits to Bulgaria, that turned her towards a life of crime – Kostov would be one of the people she knew at that crucial time and attempts are also currently being made to find out his whereabouts. We will keep you informed of further developments, but any help would be very welcome!