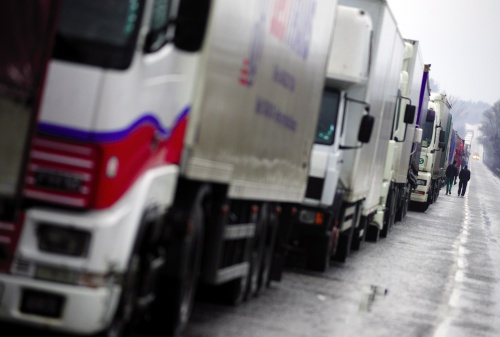 Truck drivers walk at the Bulgarian border point with Greece in Kulata, some 180 km from Sofia, Bulgaria. Photo by BGNES

The blockade of the major Bulgaria-Greece border crossing point Kulata-Promahonas was lifted on Saturday but it remains uncertain whether protesting Greek farmers will not block it again.

The major border crossing point between Bulgaria and Greece was closed and reopened several times overnight by Greek farmers whose protests have subsided in other parts of Greece but still continue in the Serres District.

Despite the intermittent blockading of the Kulata crossing some 30 trucks managed to get through overnight.

The three other crossings on the Bulgaria-Greece border are not blockaded as the farmers in the respective Greek districts have terminated their protests over agricultural prices.