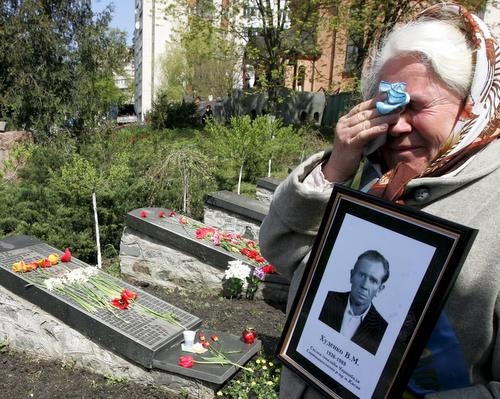 Ukrainian widow weeps with portrait of her lost husband in hand near the monument to people who were killed during cleaning works after Chernobyl nuclear power plant disaster during a memorial ceremony in Kiev, Ukraine. Photo by EPA/BGNES

Twenty-four years after Chernobyl's explosion, the world's worst nuclear disaster, Bulgarians have voted the information blackout that surrounded the tragedy the country's most weird event during the past century.

The poll is part of an on-line and text messaging campaign, organized by the Bulgarian National Television, which aims to elect Bulgaria's most important political, cultural and scientific achievements over the 20th century.

The April 26, 1986, explosion at Chernobyl's reactor No 4 spewed radiation across much of northern and eastern Europe over a 10-day period.

The accident happened at one of four reactors at the Chernobyl nuclear power plant, 110km north of the capital, Kiev.

The full effect of Chernobyl on Bulgaria remains unclear, largely because of the information blackout the authorities imposed following Soviet orders. Yet the rise in cancer rates and genetic defects speaks for itself.

The blackout hid thousands of deaths, while safety concerns turned the nuclear energy issue into a political one – in Bulgaria and across Europe.

Official UN figures predicted up to 9,000 Chernobyl-related cancer deaths, but a Greenpeace report estimated a figure of 93,000. Greenpeace said other illnesses could bring the toll up to 200,000.

The list of nominations in “the most weird event” category also featured the trial against Bulgarian Sergei Antonov, who was arrested after the assassination attempt against Pope John Paul II and held for more than three years in Italy, only to be acquitted over lack of evidence; the suggestion by the late communist leader Todor Zhivkov for Bulgaria to become the sixteenth republic of the USSR; the (un)disclosed files of the former state security, which is believed to have remained quite potent after the fall of the regime.

Bulgarians recently named the emblematic date September 9, marking Bulgaria's anti-fascist uprising in 1944, the most important political event in the country for the past century.

An appliance for roasting peppers, called "chushkopek“, was voted the most revolutionary household device.

The St Nedelya Church assault, a terrorist attack on St. Nedelya Church in Bulgaria, carried out on 16 April 1925, garnered the most votes in the crime category of the poll.