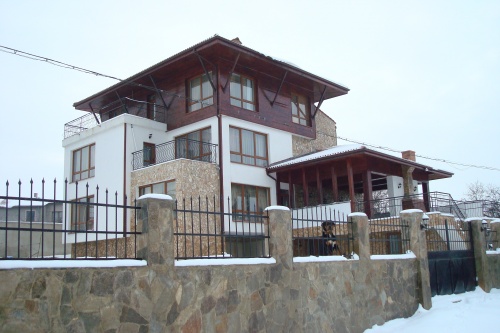 In Borislavov’s request to the court he states that he will accept Duncan’s villa (above) as compensation rather than the BGN 500 000 that he is allegedly owed. Private Photo

Duncan Banbury, from St Albans near the UK capital London, came to Bulgaria with his partner in 2004, with plans for the future and fond memories of a long and well appreciated career as an expert plumber and heating engineer.

They picked Bulgaria as a place to relax and for healthy living with the long hot summers in a villa in the village of Bliznatsi near the Black Sea capital Varna. However, things didn’t quite work out as planned as Banbury eventually found himself going from court room to court room and from mafia threats to being on the verge of losing his BGN 500 000 dream home.

Banbury comes from a strong family background in the UK, with his mother one of the first police women in the UK and his father a metropolitan policeman and heavy-weight police boxing champion.

The highlight of his own career as a top-class plumber was being noted as one of the most-trustworthy plumbers in the UK after an investigation by the once popular That's Life! - a magazine-style television series on BBC One between 1973 and 1994, presented by Esther Rantzen.

Banbury first came to the Bulgarian public’s attention as a founder of the Foreigners Association in Bulgaria, which campaigned for justice in the case of UK expat Bryan Talbot who won a property fraud trial in Bulgaria in December 2009 that drew the attention of Vice President of the EC, Jacques Barrot, and the UK Secretary of State for Foreign and Commonwealth Affairs, David Miliband. (This case has now been appealed in the Supreme High Court.)

This is when Banbury first informed Novinite.com of his own personal Bulgarian tragedy that “seems to have lasted forever”.

His problems allegedly started with his first builder who was renovating his villa and who Banbury accused of emptying money from his bank account and stealing after being given power of attorney. The case against his builder was thrown out due to lack of evidence, with Banbury also accusing his ex-lawyer of double dealing in the case.

The case ended, Banbury went back to his normal daily routine, and after a short time he decided with English friends to concentrate on starting a small rent-a-car business in early 2007, with 7 cars and a mini-bus, which he bought in 2007. Sadly, rather than leading to the planned quiet money-making scheme the business never started and led to a court case that is set to ruin his life.

After never being able to start up the rent-a-car business due to two of his cars “going missing” and his Mercedes mini-bus being stolen after an argument with neighbors, Banbury was informed that unbeknown to him a civil case had started accusing him of not paying back a BGN 500 000 loan to a man he says he has never met. The case was started without him knowing after his ex-lawyer allegedly failed to change his mailing address, it was later frozen.

After Banbury was informed of the case he found out that the man accusing him, Zdravko Borislavov, had produced a promissory note to the civil court.

Borislavov later claimed to the police that in late 2007 he had given BGN 500 000 to Banbury in a plastic bag at a meeting in the Golden Sands resort, money which Borislavov stated was never returned.

Banbury refuted these claims saying he had never met Borislavov and that his signature was a forgery.

During the long criminal investigation initiated by Ban from 2008-2009 it became clear that after 3 hand-writing tests that Banbury’s signature could have been forged.

However, the police failed to investigate who had done the possible forgery and threw out the criminal case.

Meanwhile, along with the police, Banbury contacted the Bulgarian tax office who made a full means test into Borislavov allegedly showing that he had made less than BGN 200 000 in his entire life and had no reported income from 2004-2008 as he was living on a disability benefit.

Banbury alleges that Borislavov is a front man for the local mafia, who are friends with the builder who he earlier took to court, and claims to have received threats along those lines. His lawyer, Nikolay Tachev, also questioned why the police did not fully investigate the case and blamed them for causing Duncan extra problems.

Borislavov in turn alleges that whatever Banbury reported to Novinite.com is not true. He stated that he claims the exact opposite and that he may well turn out to be the victim. He added that he is leaving everything in the hands of the lawyers and the courts who will rule on the case. Borislavov also said that he is currently very ill.

After the criminal case Banbury took a short sigh of relief before being thrown back into the courts after it was announced that Borislavov had re-started the civil case against him, accusing him of the same charges.

In Borislavov’s request to the court he states that he will accept Duncan’s villa as compensation rather than the BGN 500 000 that he is allegedly owed. Borislavov had also come up with another BGN 20 000 from seemingly thin air to pay the new court taxes.

Due to some evidence from the criminal case not being allowed to be used in the civil case Banbury now faces a trial on March 4 that is set to decide whether his life will be devastated and his dream house confiscated from him after a three-year battle that has taken him to the edge.

Banbury summarized his situation in one final call for Bulgarian justice; “Bad people pick on me, while I try to help others.”