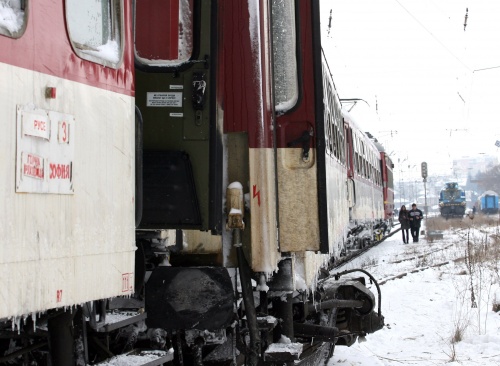 4 cars of the international Moscow – Sofia train derailed near Bulgaria's Kurilo, but there were no reported injuries. Photo by BGNES

A malfunction in one of the cars and a missing part from the railroad have caused the Monday derailment of the Moscow – Sofia express train.

The information was reported Thursday by the General Director of Railroad Infrastructure, Milcho Lambrev, who says the exact cause of the malfunction is still probed.

A 16-centimeter-long part had been missing near the Kurilo railroad station, which Lambrev explains with a metal defect caused by the low temperatures that day, but adds the railroad had not undergone any repairs in the last 25 years while the car has been 20-years old.

The Director further informs theft of cables and railroad parts is getting more and more frequent in Bulgaria, however, he did not receive notification of stolen railroads in the last month. Meanwhile, a check of the entire rail network in the country has been ordered.