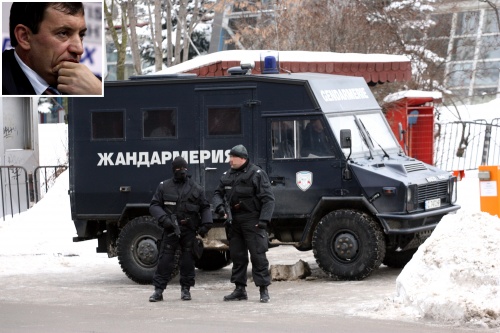 Police searched Wednesday the premises of the Sofia “Spartacus” Stadium where Aleksey Petrov's offices are located. Photo by BGNES

In addition to Petrov, Anton Petrov aka The Hamster, Marcelo Dzholotov aka Marcelo, Plamen and Yordan Sotoyanovi aka The Dambovtsi Brothers, Mochil Krastev and Nikolay Velkov are to be kept behind bars, the Prosecutor says.

The Court will convene later Thursday or Friday morning.

The 7 are among the 14 people arrested during the Tuesday overnight special police operation codenamed “Octopus.”

According to the charges, Aleksei Pertov, former top undercover agent for the State Agency for National Security (DANS) is the ringleader and the others are members of a criminal group with hierarchy structure. In the last 10 years the gang had been dealing with racket, extortion, prostitution, draining of money from the steel mill “Kremikovtzi,” draining of Value Added Tax, trading in influence, money laundering and other criminal activities.

The "Dambovtsi Brothers” are said to have been the closest to Aleksey Petrov. The two are also reportedly key “Octopus” figures, involved as owners of the firm "Ecometalengineering,” in the draining of the troubled steel-maker Kremikovtzi. The draining was, allegedly, controlled through the security company guarding the plant. The Brothers are also known to have been close with notorious car thief Gancho Vachkov, aka Ganetsa, who was shot dead in Sofia in 1999 during a police chase.

The Hamster, who is presumed to have been “The Impudent” ringleader, was also detained through the special police operation “Octopus,” and is believed to be the link between the two criminal organizations.

The Hamster was arrested in December during “The Impudent” operation and later released on bail over lack of evidence.